Enson Inoue is on another pilgrimage in Japan, and he’s refusing to sleep indoors

In that Kung-Fu show, Caine wandered the earth looking for crime to solve that would fit in a one-hour episode. Eventually he found a closest in downtown Bangkok and died by autoerotic asphyxiation. They would never show that episode, probably because it was already leaked on the internet via gruesome autopsy pictures. RIP David Carradine and his highly underrated filmography. Fortunately, we have Enson Inoue to continue his voyage across the earth, only this time it will be a spiritual journey and hopefully not involve any form of autoeroticism.

Back in 2010 Enson Inoue embarked on a 1,200 kilometer spiritual journey on the island of Shikoku off the coast of Japan. The six-week journey is called the ’88 Temple Pilgrimage’, a voyage that most people travel by bus. However, there exist that select few of hardcore fanatics that circumnavigate the entire island by foot. According to Wikipedia, people who decide to walk the pilgrimage have to wear white jackets with the words Dōgyō Ninin on their back which means ‘two traveling together’, the other person is a spirit of a monk named Kōbō Daishi.

Now it looks like Enson has embarked on another pilgrimage, but this time in the frigid cold of Japan’s Winter. Just before he started his voyage, Enson launched a new site in which he can update the world on his blog via his phone. Check out this entry he wrote just a couple days ago regarding nearly giving up — until he realized he’s friggin’ Enson Inoue.

Fuck it’s too cold. Not sleep. Been seeing double at times. Noticed my feet are swollen last night. Wonder if I’m pushing too hard? It can’t be. I haven’t collapsed or passed out.

I did a full pilgrimage 2 years ago all 1400 kilometers at once in the summer which too me a full month. This year I’m doing it in increments. This is my third time and the coldest to date. How can this short week interval be harder than the full pilgrimage I did. Can the cold be that big on how strenuous it is? Maybe it’s a combination of the lack of sleep and the cold.

It also could be a mental thing where my mind is not set for a long pilgrimage. When I did a full pilgrimage my mind was set for a full one so I paced myself better.

In the first five days when I felt like I was breaking down I knew that I still had only started so maybe mentally subconsciously eased up a bit. Maybe because I know this is only a week, no matter how tough it gets, “it’s only a week” is in the back of my mind so I keep pushing every step to the limit.

I’m scaring myself because I’m literally thinking of giving up. Not giving up continuing the pilgrimage but giving up on the strict rules that I put upon myself. Steeping outside every night, eating only once a day, and trying to push myself to complete as many temples as I can before the 5 pm deadline. The only exception I will give myself to sleep indoors is if I was offer a bed as “osetai” which in Japanese means “an offering”

Last year I had many offerings 3 times I was given a roof to sleep under and a bed sleep in and tge other times they gave me water and sometimes bread.

The nights I was given a bed to sleep in, I felt like I made a full weeks recovery.

Still have 4 more days in this segment and I feel like I’ve reached my limit. I’ve always said until you feel like giving up you’re really not trying. So I guess from today, its going to be considered really trying.

From the moment you feel like giving up….. each and every second after that you can continue and move forward your getting stronger, strengthening your spirit and your heart. That is what is keeping me going on this segment. Knowing that I’m building the strength within myself every step I take.

Many people stop as soon as they feel like giving up. I think it’s the normal thing to do but little do they know they are just letting a precious opportunity escape. I’ve always said that from the time you feel like giving up, that’s where the excitement starts because from that point on, you’re becoming a stronger person.

From this day on, every step I take I’m spiritually, mentally, and emotionally becoming a stronger person. With that in mind I know I can move forward and I WILL!!!

These are the moments that separate the regular man from the warrior and the warrior I will be.

As I wrote this article, Enson Inoue posted two new blog entries — so feel free to check them out if you want to be inspired beyond human belief. Here’s a pretty slick image he posted from his voyage just yesterday. 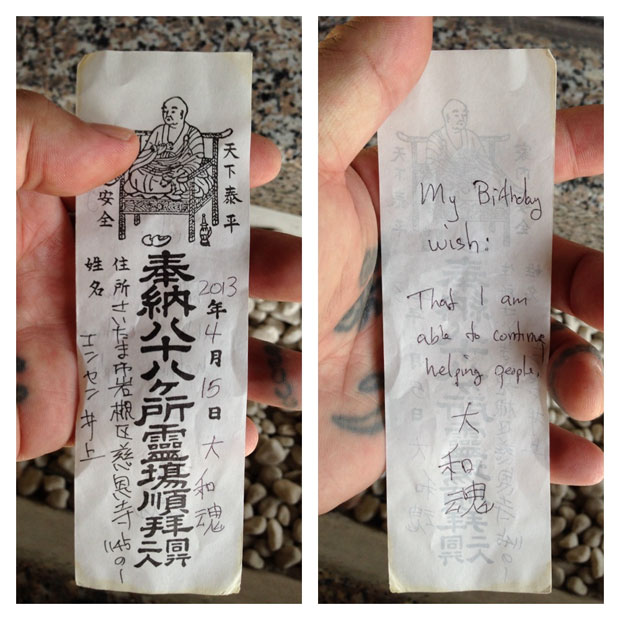