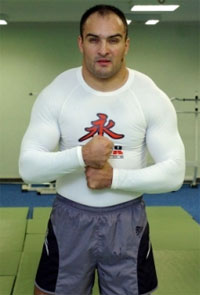 The ‘Hepatitis Gate’ is the most infectious controversy in MMA. I suggest you get tested after reading this. Last week, KSW co-owner, Maciej Kawulski, broke the news that he severed Aleksander Emelianenko’s contract negotiations upon discovering that Aleksander allegedly has hepatitis C. Since then, Aleksander has denied the allegations and now expects a televised apology.

Redakcja at MMANews.pl had a suspicion that none of us could speak Polish. Well, he was right. Fortunately, he took the time to translate a recent interview he conducted with Miodrag Petkovic, a former opponent of Aleksander Emelianenko who claims that he knew Alek had hepatitis before he stepped in the ring with him a few months ago.

Did you know about this before you accepted the fight?

Did you know about whole situation before you fought him?

– “Yes, because we have a blood test before and after every fight.”

And did you do it also after the fight, like a few months after?

Shortly after Redakcja interviewed Miodrag Petkovic, he received a text from the fighter stating that he had another blood test and he should know the results sometime tomorrow. It’s true about the hepatitis B. In fact, 33% of you reading this are infected with hepatitis B and don’t even know it. There’s no cure for the virus, you’re just going to have to live with it…like an annoying in-law. [Source]