EliteMMA.com has a little present for all of you 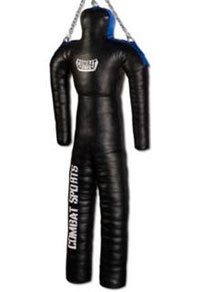 I had this roommate back in college named Doyle that tried to make a life-sized dummy out of old clothes and duct tape. He told me that he wanted something to kick in the face every day after his Spanish 202 class. Dude wasn’t the smartest guy. He also climbed a lamp post armed with a kitchen knife because he needed a light for his bedroom. He used to dress the dummy up in a Los Angeles Lakers shirt and smack it in the face because he really, really hated Rick Fox. Doyle thought Rick Fox was the only thing standing between him and a date with Vanessa Williams. We eventually threw the dummy in the dumpster after weeks worth of our dog secretly peeing on it at night.

If my old roommate knew about EliteMMA.com, then he would finally have something to round-kick in the face like some drunken idiot. EliteMMA offers some pretty exquisite Combat Sports Grappling Dummies on their site and they want you to own one. Actually, they want you to get one so bad that they are giving all MiddleEasy readers a 15% discount off all Grappling Dummies. Just use ‘easydummy’ for the coupon code at checkout and you can put 15% of your grand total right back in your pocket to use later tonight (when you have to catch a cab across the city because your roommate locked himself out…again).

If you’re not familiar with EliteMMA.com, they’re an MMA supplier with a massive emphasis on actual fight gear. If you’re looking to finally get off your sofa and enter the MMA world or you just need to update your pair of moldy rashguards, EliteMMA is the place to go. EliteMMA.com has a live inventory list so you won’t have to worry about dropping cash on a few thai pads only to find out that they’re on a three-month backorder. Now what you need to do is direct your cursor somewhere in this direction and click furiously until EliteMMA.com appears. Be sure to use the coupon code ‘easydummy’ for 15% off any grappling dummy, something my old roommate could have used years ago. I’m telling you this because EliteMMA has never let me down and out of the plethora of MMA gear sites that appear on the net, I always go with them. Just spreading the love.