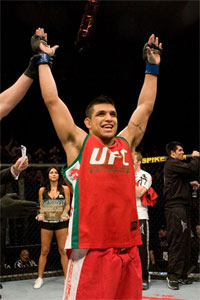 Whenever the UFC deadly flying guillotine is activated, it usually strikes a total of three times before it hides in whatever blood-stained cave it resides in. On its blade lies the blood of over seventy fighters who have entered the doors of the UFC only to be unexpectedly slaughtered without their prior consent. Today, Efrain Escudero becomes the second winner of any season of The Ultimate Fighter to be cut from the organization after just his second loss of his MMA career.

Efrain lived in the same apartment complex as I did in Tucson. He borrowed my keg tap a couple times. From what I remember, he would come to my neighbor’s apartment and play Mortal Kombat: Deadly Alliance during the day. His friend enabled me to pass Spanish 202, and I bought him a 12-pack of Moosehead Lager for it. That’s why when Efrain Escudero tweeted that he was released from the UFC today, it sort of hit home (if not home, then at least the apartment complex we shared a few years ago).

Escudero also mentioned that he’s already talking to Strikeforce and Bellator and that he plans to take a week off and then perhaps sign with one of the promotions. At least in the present moment of the timeline we’re currently living in, being cut from the UFC does not denote the end of one’s MMA career. Perhaps in some alternate universe, being cut from UFC means some public form of execution that would be broadcast on Spike TV, but luckily that’s not the universe we inhabit. [Source]

Now that Chael Sonnen has tested positive for steroids, this UFC 122 poster takes on a whole new meaning
← Read Last Post
Rich Franklin doing the chicken dance is as awkward as you thought it would be
Read Next Post →
Click here to cancel reply.