Eduard Folayang and Ole Laursen is a Classic Clash of Styles at One FC: War of the Lions

In perhaps one of One FC’s most interesting bouts to date, Wushu Sanshou expert Eduard Folayang will be squaring off against the Kickboxer Ole Laursen at One FC: War of the Lions in one of One FC’s Lightweight divisions most hotly-anticipated bouts. This bout was originally slated for the inaugural One FC event, Champion vs. Champion in September of 2011 before Laursen suffered a knee injury and had to pull out, being replaced by A Sol Kwon. Folayang earned a hard-fought victory over Kwon and Laursen made his One FC debut at Battle of Heroes in February, losing via submission to Felipe Enomoto. The loss, though, does not take away from the intrigue behind the bout, which is at its core a very interesting clash of styles. 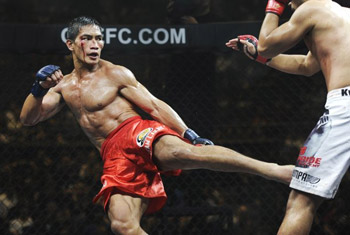 Eduard Folayang is one of Asia’s most promising prospects in any weight class, fighting at Lightweight and touting an impressive 11-1 record, with seven of those wins coming by way of knockout or submission. Folayang, who fights out of Team Lakay Wushu in the Philippines, brings the unique style of Wushu Sanshou into the ring with him, but do not be confused by that, he also has a well-rounded grappling game to go with his striking acumen. This is not the first time where Folayang has faced a world class striker, as his bout with Vuyisile Colossa proved. Colossa is a world-renowned Kickboxer from South Africa who has translated his skills into Mixed Martial Arts rather well, but Folayang’s tactics included working multiple takedowns and out-grappling Colossa, earning him the victory. Going into the fight with Laursen, a similar tactic would appear to be a smart move, as there is no doubt that Folayang could hold his own on his feet, but working against Laursen’s weakness could ensure him a clear path to victory.

Ole Laursen is a product of the Kickboxing world and has fought all over the world against some of the toughest opponents known to man. His Kickboxing career in K-1 was dotted with victories and losses, but the losses came to some of the best and brightest like Buakaw Por. Pramuk, Masato and Andy Souwer. While under contract to K-1, he was led into the MMA ring where he was sent like a lamb to the slaughter against two highly-accomplished grapplers in Genki Sudo and Caol Uno. Since then, Laursen has worked on rounding out his MMA game, even picking up a win via rear naked choke along the way. Do not doubt for a second, though, that his striking is not his strong suit, because it is. Fighting out of the Legacy gym in Thailand, he is always improving his Muay Thai and will look to meet Folayang’s Sanshou head on at One FC: War of the Lions.

It will be a classic clash of stand up styles at One FC: War of the Lions, with Muay Thai taking on Wushu Sanshou, but the question arises of if the “mixed” aspects of Mixed Martial Arts will really be the deciding factor in this bout. Fans will finally get to see the showdown that they were supposed to get in September, and One FC’s Lightweight division will see yet another exciting bout between two men who could reign on top of the division for years to come.

Dana White says there would be no professional sports if the NBA, NFL, and MLB started testing their athletes
← Read Last Post