If there is one thing that Brazilian Jiu-Jitsu has taught us over the years, it is that size does not seem to matter. This was seen yet again when Dustin Poirier was caught on camera getting a choke on 400lb strongman champ Brian Shaw.

As one of the best lightweights in the world, Poirier walks around at less than 200lb. That does not stop him from being an incredible athlete with skills that he has honed over time to develop a well rounded game.

On the other hand, you have Brian Shaw who is a four-time winner of the World’s Strongest Man. Like most strongman athletes he is a giant, standing 6’8 and weighing upwards of 400lb in the prime of his career.

Dustin Poirier and Brian Shaw Trade Wins On The Mats

Recently these two elite athletes crossed paths for a bit of training and a sit-down interview. The most entertaining part of this encounter certainly came when Dustin Poirier and Brian Shaw hit the mats for some rounds of grappling.

A pair of videos emerged of this training session, making the rounds online. The first clip sees Dustin actually getting the better of Brian, taking the giant’s back and sinking in a rear naked choke.

That said, Poirier was quick to note that Shaw got him back, and that was made clear with the second video clip. This one sees the World’s Strongest Man on top of Dustin, swarming him and even taking the lightweight contender’s back.

Discussing The Gameplan For McGregor Trilogy

Now as fun as it was to see these two going at it, Brian Shaw and Dustin Poirier did more than just grapple. They also sat down for an interview which was posted to Shaw’s YouTube channel.

In the video, the main topic of discussion is Dustin chronicling his journey from fighting in local fights, to the WEC, and now being the number one ranked lightweight in the world. That said, they also briefly discussed what he looks to do when game planning for a third fight with Conor McGregor, which is targeted for July.

“The first time me and Conor fought was 2014, and then we just fought January of this year, so I have some recent footage to break down,” Poirier said.

“Getting ready for the last one, we knew he was going to be completely different than the first time we fought. It was six year later, seven years later. But that’s it. We go down, start breaking footage down, and put everything together to lay out a solid nine week training camp.”

It was awesome seeing Brian Shaw and Dustin Poirier train together like this. Maybe they will get some more work in before Dustin faces off against Conor McGregor, which is expected to be on July 10th. 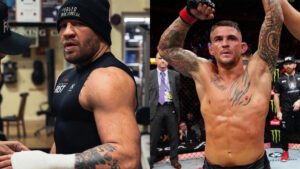