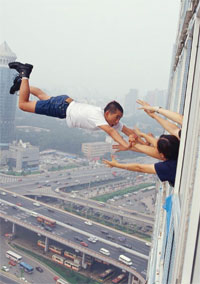 A couple of nights ago I met a guy at a bar (not in that way), let’s just call him John ‘the compulsive liar’. Dude had a tattoo of the Frank Shamrock logo on his back and showed me a pink laminated card in his pocket that certified him as a black-belt in Muay Thai. I wanted to just hailstorm on his parade and tell him you don’t get belts in Muay Thai but listening to this guy talk was entirely too entertaining. He told me that he beat Chris Horodecki at IFL (and no his name wasn’t Ryan Schultz, the only guy to hand Horodecki an L in his MMA career) and continued to tell me that I could join IFL if I continued to work out. I’m not sure if he realized IFL has been extinct for over a year now…but once again, you can’t let the truth get in the way of a good liar. Towards the end of the night, he tried to show me some BS move that involved holding my arm out for an extended amount of time while he placed his thumb around my wrist and did absolutely nothing. I tried to tell him that I just wanted to drink my cosmopolitan and watch TUF 10 but he insisted that I get up so he can demonstrate some move he saw in a Jean-Claude Van Damme movie. For anyone who thinks I made this up, here’s a picture to prove it. God I wish this AP story was about him.

FARMINGTON, N.M. — A New Mexico man fell to his death from a third-story hotel window while re-enacting a move from the “Ultimate Fighting Championship.”

Police say 25-year-old Darenell Jones was pushed into the window Wednesday night while celebrating the marriage of a family member at a Farmington hotel. Police said the people in the room were drinking.

They say the window broke and he fell 20 feet to the sidewalk below.

Jones was pronounced dead at the hospital. The case was forwarded to the district attorney’s office for review.

That picture is from a performance artist who placed 2nd in having the coolest name on the planet, Li Wei. You can see more of his stuff here. [Source]

Rampage pulling out of UFC 107 means UFC can't counterprogram Fedor vs. Rogers
← Read Last Post
Before you see him in the cage, watch Mariusz on the dance floor
Read Next Post →
Click here to cancel reply.