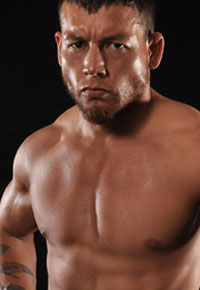 I’ve seen Waachiim Spiritwolf fight live a total of two times in two years in two different states in two different organizations. There’s probably a multitude of things I could say at this point like ‘…and he has two amazing fists’, but that would be expected and cliche. Instead, I’ll tell you that shortly after Waachiim Spiritwolf knocked out Brett Cooper at The Ultimate Chaos, Ron Kruck of Inside MMA promised to get me a shot of whatever I desired after the event. I held him up to it and at the official afterparty, Ron was no where to be found. The guy mysteriously disappeared, leaving myself, Gilbert Yvel and Tracy Lee to party off the coast of Biloxi, Mississippi. I tried meeting up with Ron Kruck the next month at UFC 100 in the Mandalay Bay, but after I talked to him the first night, he magically ‘lost his phone’ the next day. In short, Ron Kruck is ducking me and if you see him, tell him he owes me a drink. Seriously, he does.

Strikeforce Challengers 12 comes on Showtime at 11pm EST tonight and features a bout that we can assume will not end in a submission: Marius Zaromskis vs. Waachiim Spiritwolf. After his Strikeforce Challengers 11 loss to Billy Evangelista, Spiritwolf amassed a tribe of people that surrounded him, insisting that he didn’t lose the fight. It’s debatable, but from my viewpoint (next to Miss RaRa), it appeared to be a decisive draw — if that even makes cognitive sense. The event will be headlined by Shaolin Riberio and the unbelievably muscly Justin Wicox. Jan Finney will also fight against Liz Carmouche in an attempt to show the world that whatever damage she received from Cris Cyborg and Strkeforce: Fedor vs. Werdum was not permanent. OSP (Ovince St. Preux) will also make his Strikeforce debut tonight against Antwain Britt. Free MMA on a Friday, got to love it.