Posted on Last updated: September 3, 2010 By: Author Team ME 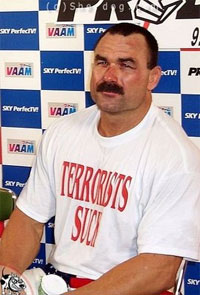 Don Frye does not have to answer the phone. His mustache picks up the incoming electrical impulses and translate them into audible sound. That joke worked a lot better when it belonged to Chuck Norris. I’m sure Don Frye’s mustache doesn’t appreciate being panned in on hand-me-down Chuck Norris beard jokes. All apologies go towards Don Frye’s mustache. I never intended this article to offend you in anyway. If your mustache feelings were hurt, I deeply apologize. Maybe one day we’ll get a few beers and if you want, you can call Don Frye to join us. In the meantime, let’s read how Frye calls himself a ‘raw boned guy’ in this interview with Jonathan Snowden.

“It’s funny. We were talking about how the fans now days, they don’t go back to before UFC 50. They don’t know where this stuff started. Or how it started. Or the level of the fighters. Sure, you have a much better level of athlete now, overall more athletic talent, but there were good athletes back then too. Athletes who were the type of guy to get knocked down, bloody, and broken bones and get right back up and finish the fight. That’s what we had back then. A bunch of raw boned guys. Like me. I’m not that much of an athlete. I don’t have an athletic bone in my body. Bas Rutten can jump and do the splits. Heck, I can barely pull my underwear up some days. But I’ll give it a go all the way.”

Regardless of whether you know what a ‘raw boned guy’ is, it’s evident that we can never be considered one. I guess it’s back to playing Halo and watching reruns of Cheaters for all of us. [Source]