EDIT 6/7/2017:
A previous version of this article suggested that Jim Edwards may have received a commission from bets made by people who clicked his link. BetSafe has reached out to clarify that while they do have relationships with influencers to encourage brand promotion, Jim Edwards did not receive commission for any bets people may have made. Find the detailed BetSafe response at the bottom of this article.

Jim Edwards has had an interesting 2017. Starting the year as a part of FloCombat’s reporting crew, he had the respect of the entire industry as a true workhorse of the game. But his tenure with FloCombat ended in the midst of a plagiarism controversy reported by MMA Media Watch. Notably, Media Watch reported that FloCombat and Edward “parted ways” as “some things with Jim had been off” and didn’t involve the claims of plagiarism against him.

On the morning of UFC 212, Edwards’ ethical issues seemed to have surfaced once again. Jim posted a series of bets from his Twitter account with links to betsafe.com encouraging his followers to take his betting advice and use betsafe.com’s services. 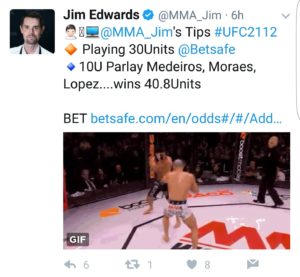 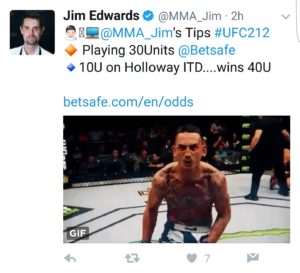 Now, many media outlets have endorsements and/or advertising embedded into their content. That is just an unfortunate reality of modern sports media. But this is a horse of an entirely different color. In this case, a journalist is using his personal twitter account to encourage his followers to use a gambling service and he is prompting his fan base to take his advice for placing bets.

The truth of sports gambling is it’s incredibly difficult to remain consistently profitable. If players didn’t regularly lose money, sportsbooks just wouldn’t exist. The advice being given out by Edwards here is entirely irresponsible and is not looking out for the best interests of his followers. He is presenting these plays as “tips”, a way for his followers to profit off his expertise in the sport, but anyone with a firm grasp of proper sports betting strategy knows this is horrid advice.

The first bet is a three leg parlay (which are historically money losing bets) which he encourages players to bet 10 units on. For those not aware of gambling jargon, 10 units is supposed to represent 10% of a bettor’s bankroll. No respectable gambler (if such a thing exists) would suggest you place 10% of your gambling money on anything. I spoke with Daniel Levi of BestFightPicks.com and host of Half the Battle. He has one of the most long standing, respected, and profitable MMA betting sites on the web. All the advice and bets he posts are free, and he doe not have affiliate deals with any sportsbooks. Dan offered some advise of people offering betting tips. “Know where you’re getting your advice from. There is a reason why 3rd party tracking exists.” He continues, “Stay away from anyone that says they bet 10 or more units per play. No legit bettor risks 10% of their bankroll on one play.”

Jim Edwards’ second bet was for 10 units on Max Holloway defeating the legendary Jose Aldo inside the distance. That means Holloway would have to knockout or submit Jose Aldo for the bet to cash. Now while that is definitely a possible outcome, it is an incredibly risky play.

Following an immediate and overwhelming backlash from the MMA gambling community and the MMA community at large, Edwards deleted all the bets he posted. He briefly posted a listing of odds available from BetSafe and a link to their site, which he then took down as well.

Beyond that there are many people on the web claiming Edwards is being paid directly to posts videos form BetSafe and give this betting advice. It is a direct conflict of interest for a person to present themself as a legitimate source of news, take a paycheck to promote a sportsbook, and then encouraging his following to make risky bets on that same sportsbook. It’s this lack of ethics that hurts MMA journalism as a whole. For a journalist to do this without clearly informing his readership of his track record as an MMA bettor, and without openly acknowledging if he is being paid by the sportsbook he is working for, it morally abhorrent. It breaks the inherent trust readers give journalists. And that shouldn’t be tolerated.

Betsafe. A gambling site. He posts a link to their site with his bets in exchange for a percentage of the profits they gain from it.

He also got paid £200 to RT the Betsafe videos for this weekend.

As it turns out, this is not the first time Edwards has worked out this type of relationship with a sportsbook. For the record, both of those bets were losing bets and pretty risky in this writer’s opinion.

Shout out to @MMA_Plays on Twitter for the screenshots.

Middle Easy reached out to Jim Edwards for a comment and as of the time of publication, he has not responded.

BetSafe response:
“I noticed you have published an article about Jim Edwards giving bad betting advice with suggestions Betsafe was associated with this and that he has an affiliate deal with him, to give this irresponsible advice. There are also suggestions that he was paid 200 to share content.

These allegations are not true. Jim Edwards has no affiliate deal with Betsafe and was not on a commission to drive people to place a bet on Betsafe.

As one of the UK’s main influencers of MMA Jim was asked to share content to drive brand awareness within the MMA space and not to give his own betting suggestions. We work with a number of high profile former sports stars in a similar fashion so we can reach their social followers and drive the association of our brand to the relevant audience.” 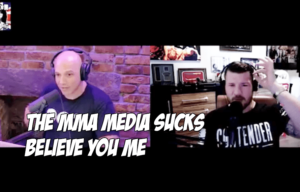 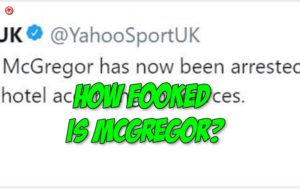 Pic: Yahoo Sports reports Conor McGregor was arrested at his hotel then deletes it 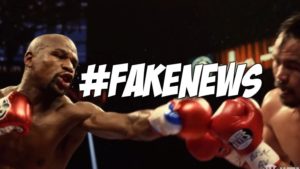 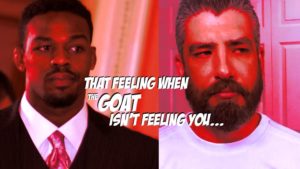 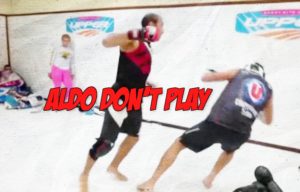 Video: Brazilian reporter trains with Jose Aldo, gets KO’d and choked out for journalism 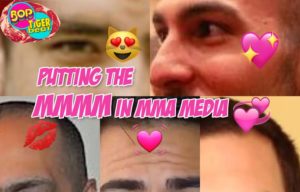 Something for the ladies and gents, here are The Top Five Beefcakes in MMA Journalism