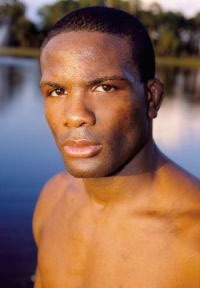 Ricardo Mayorga looks like a guy that knows a guy that can sell you an AK-47 from the trunk of his Cadillac El Dorado. If you’re not familiar with Ricardo Mayorga, dude was the former WBC and WBA welterweight champion among a list of other titles that you will probably never own in your life. In September, Ricardo signed with Shine Fights in September and MMA legend/underground cage-fighting promoter extraordinaire, Din Thomas immediately wanted to fight Mayorga. Here’s what he said about Ricardo and his future career managing a Nicaraguan fruit stand.

”Ricardo Mayorga just signed to fight in Shine. I think he is afraid of me. If he does accept the fight I will put him into retirement and send him back to his fruit stand in Nicaragua. He will be wearing a straw hat, smoking cigarettes, and selling bananas once and for all. This is MMA and I will beat him standing or on the ground. I will let him pick how he wants to lose his first MMA fight.”

Hey, nothing is wrong with rocking a straw hat…just ask those evil flying guys in Big Trouble in Little China. Now MMAMania is confirmed that Din Thomas vs. Ricardo Mayorga will go down at Shine III sometime in March 2010. In honor of Din Thomas having his wish granted, we will grant you your very own Brazilian jiu-jitsu lesson compliments of Din. Check out Din’s very own ‘Burnt French Fry Choke’ from his DVD set of 1001 submissions. Yeah, he teaches you how to submit someone in 1001 different ways. Pack that in your pipe and smoke it…then pass it to Joe Rogan. [Source]

Cris Cyborg may pose for Playboy, so here is a topless picture of her
Read Next Post →
Click here to cancel reply.