Did anyone else catch when Diego Sanchez blurted out that it was impossible to beat a free MMA event on SpikeTV? Kenny Rice somewhat called him out stating this ‘It’s nice of him to make that comment while he’s on HDNet’. I’m not sure why I quoted that phrase because that is by no means word for word but It’s as close as humanly possible without having the recording in front of me.

Point of all this is, ever since that moment, Diego Sanchez opened himself up to an entire gammet of semi-warantless critisim. Like why would he rock that dumb hat on TV. Dude looked like he belonged to a 1956 scat band. And why would he continue to cut off a chick that has a muay-thai record of 44-0. You read that right, 44 wins and not a single defeat.

Damnit Diego Sanchez, you hijacked this week’s episode of Inside MMA and Bas Ruten you let him do it. You let him do it! Kenny Rice kep it real but the King of Pancerse? Do give in to that dude Bas, Come June 20th Guida is going to reconfigure that dude’s perception. By the way, Clay Guida and his brother were back up creatures for Spike Jonze’s ‘Where the Wild Things Are’. 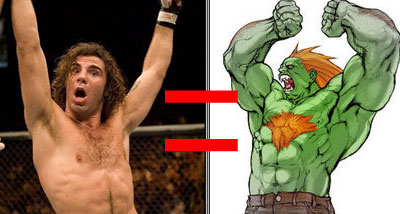