Nate Diaz Blasts “The Rock”: ‘He Can Get His A– Whooped Too!’ 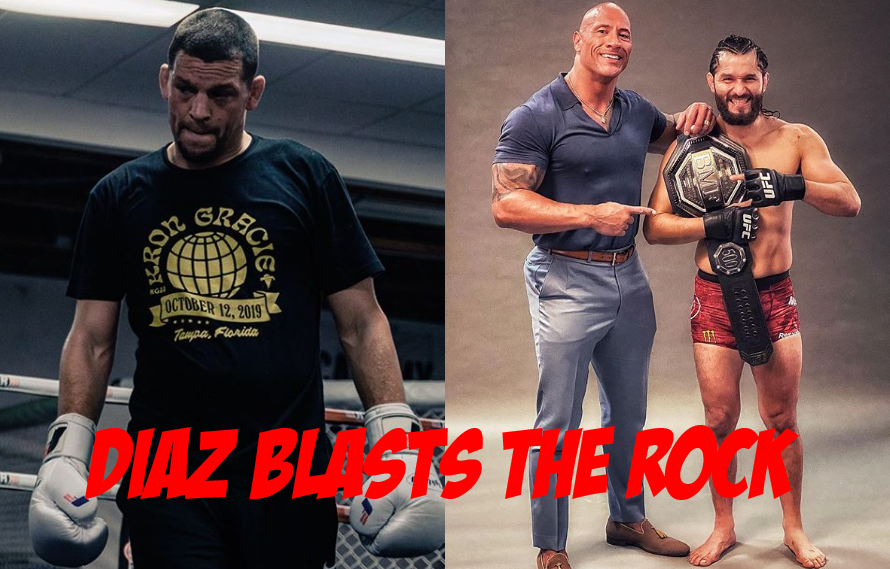 Dwayne “The Rock” Johnson had the honor of being able to present the BMF belt at UFC 244. However, Nate Diaz is not too happy with that decision.

The MMA world was abuzz when it was announced that Nate Diaz and Jorge Masvidal would be fighting for the “Baddest Motherf—er” title at UFC 244. Furthermore, this was amplified when it was revealed that there would be a physical belt, and “The Rock” would present it. As a result, UFC 244 was one of the most anticipated cards of the year.

However, when the bout came along, it was a bit anticlimactic. In between the third and fourth rounds, the bout was stopped by the doctor, due to a cut over the eye of Diaz. Nevertheless, Dwayne Johnson did wrap the belt around the waist of Jorge Masvidal.

Following the fight, Diaz was in rare form. After the fight ended the way it did, he was not too happy. Subsequently, at the post-fight press conference, he took aim at Johnson. He was not too happy with the fact that The Rock had a bias towards fellow Floridian, Masvidal.

“f–k ‘The Rock,’ too, man! That motherf—er over here playing me. Seeing him over there, smiling with Masvidal. Should have had Mike Tyson handing out a belt, if anybody. I didn’t give a f–k about no belt anyway, but he can get it, too.”

Moreover, Nate had a better idea for who should have presented the BMF belt.

However at that point, Diaz realized who he was talking smack to. He began to laugh, realizing he may just be in a bit of a bad mood.

“I’m here hurting on The Rock, huh? You guys caught me at a bad time, but you know what I’m saying. The Rock’s cool. I like ‘Ballers.’ But he picked the wrong side, so he can get his ass whooped too. With all due respect, he can get it, too.”

There has been some talk after UFC 244, that there should be a rematch between Nate Diaz and Jorge Masvidal. If this does not happen, who would you like to see him face next?