Despite his layoff, GSP’s coaches say he’s actually improved in some areas

Posted on Last updated: September 9, 2012 By: Author Team ME 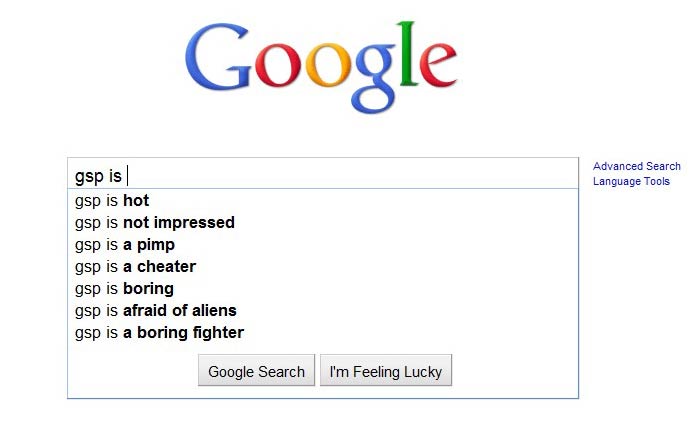 I’ve taken a near 18 month break from WoW, but I’ll admit; unlike GSP and his martial arts skills I haven’t improved in any area. In fact, I’ve got worse in just about every area. PVP? My warlock doesn’t even know where to begin. It’s like Ebay banning the sale of potions, spells and curses. A warlock without his spells and curses is like a declawed kitten, and all he has to fall back on is his potion making. You take away a warlock’s right to sell his potions on Ebay and it’s like a fighter not being able to earn pocket money through seminars, GSP.

Why did Ebay ban the sale of spell, potions and curses?

GSP does not have the problems of a financially shaky dark-magic practitioner, he’s been able to keep busy in a few key areas of his martial arts catalog and some of his coaches feel he’s even improved in some areas. Mostly anti-smoking spokesperson Renzo Grazie. Check it out:

“He didn’t throw a punch for six months,” “He came in a couple weeks ago and what I was looking for, mechanically, was that he wasn’t shying about that leg, that he wouldn’t want to do certain things because of it,”  “So I told him ‘let’s just spar,’ because with sparring you can’t really predict what’s going to happen. In sparring and fighting you don’t know what is going to happen, how your opponent is going to move. You just know he’s trying to hit you and that you’re trying to hit him.”

“I’ll show him a move while we’re sparring. He’ll see it, try to shut it down and then he’s learned it and he’ll start being more creative with the same move. ‘Coach, could I use that move like this and like this in there? And could I disguise it like this and put it there at the same time?’

“If you’re thinking about an injury, you wouldn’t be so creative. To me, I didn’t see nothing much different. He’s the same old Georges. He’s still creative, still trying things out. There was no, ‘I can’t try that because of,’ he just carried on.”

“His Jiu Jitsu was already good before, but when he came in here and trained [a couple weeks ago] I could tell he must have been doing a lot of work,” Gracie said. “His technique is even better than it was before the injury. He had the same strength and explosiveness as before, but was more technical. He’s always learning, that guy. Everywhere he goes, at all times, he’s studying and doing whatever training he can.”

Mike Swick talked to us at 3:30 AM about AKA and he got rightfully proud and nostalgic
← Read Last Post

Here are the top 5 MMA shirts of the week
Read Next Post →
Click here to cancel reply.