DEEP will be in a cage on Dec 19th and SOCCER KICKS are allowed! 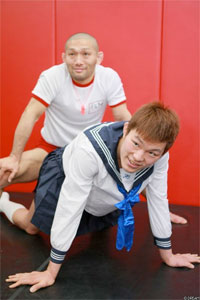 Once you get over the fact that Shinya Aoki is rocking a school girl outfit and Masakazu Imanari is doing…something behind him then you’re ready to hear that DEEP has announced five fights for their first ever cage event and one of those bouts includes our dude, Masakazu Imanari. We do know that DEEP will not be using a six-sided cage however soccer kicks, foot stomps, and elbows will be allowed. Soccer kicks! We told you PRIDE never die.

If a movie was ever made about 90’s candy and they needed someone to play the part of ‘Pop Rocks‘, Masakazu Imanari should heel hook the casting director until he gets the role. Hardly anyone knows about this dude in the states but after watching him fight, you can’t help but love the guy. Dude fights like he’s in a constant audition for Barnum and Bailey’s Circus. Yeah he got beat by Bibiano in the Dream 9 tourney, but the dude just sat in the middle of the ring to see what would happen if he did. Imanari fights like a glitchy videogame character. In fact, if Imanari were in a videogame, the best way to fight with him would be to attach chains to your controller, make it a medieval flail and just walk around the street swinging it when people get too close to you. Every once in a while, hit a mailbox just to throw a little funk in there. After you’re done, go back to your pad and Imanari will probably have the other dude in a heel hook, guranteed. Just check out this highlight reel if you’re still an Imanari non-believer. If Shinya Aoki were Luke Skywalker, Masakazu Imanari would be his Obi-Wan Kenobi.

Actually, lets get back to that Shinya Aoki school girl picture because it just set up camp inside your brain and it will probably be there for the rest of your life. There’s also another picture floating on the net of Aoki grabbing his nipple while simultaneously holding on to his butt as some guy reads something on a card. There’s also another one of Aoki wrapping his legs around Imanari as he shoves a orange whistle into his mouth. And there’s always the infamous pic of Imanari rear naked choking Mayhem Miller while Shinya Aoki removes Miller’s pants. Japan is the future. [Source] 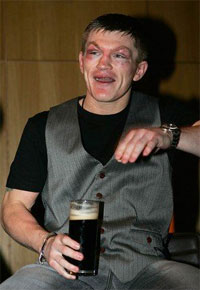 There is a chance Ricky Hatton may go to the UFC
Read Next Post →
Click here to cancel reply.