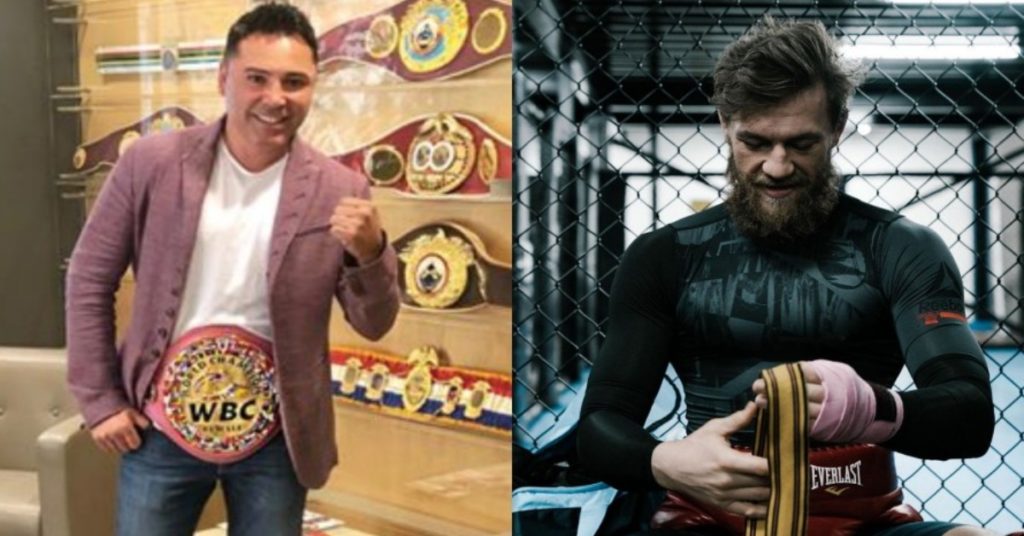 De La Hoya: I Always Go For The Kill

Oscar De La Hoya believes he would easily stop Conor McGregor in a boxing match — even at the age of 47.

McGregor made headlines when he boxed Floyd Mayweather in their highly-lucrative 2017 fight that saw him make nine figures. Although the Irishman was stopped in the 10th round by Mayweather, he received plaudits for his performance given that it was his professional debut. He has since repeatedly signaled his intentions of eventually returning to the sweet science.

Others, particularly in the boxing world, were not pleased that McGregor was ruining the integrity of the sport by coming in and facing arguably the greatest boxer of all time. De La Hoya was a particularly vocal critic at the time.

And even today, the Golden Boy Promotions founder doesn’t seem to rate McGregor’s boxing skills. At least going by his prediction of how a boxing match between himself and the former two-weight UFC champion would go.

“Two rounds. Come on, brother. Two rounds!” De La Hoya said on the State of Combat podcast (via MMA Mania). “Because one thing about me, I went for the kill always. And look, Conor McGregor, I love him in the Octagon, I respect him, I watch him all the time. But the boxing ring is a whole different story. A whole different story.”

De La Hoya also previously warned McGregor of venturing back into the boxing world when talk of a Manny Pacquiao fight heated up earlier this year.

“I think every sport should just stay in their own lane,” De La Hoya said. “I wouldn’t mind seeing a Mayweather vs Pacquiao fight again, because they’re two boxers. Just stay in your own lane. I think it’s best for every sport.”

Despite what many may feel about him, De La Hoya certainly has a point.

UFC 249 Countdown And PPV Opener Have Been Released, So Get Hyped!
Read Next Post →
Click here to cancel reply.