Dangerous Francis Ngannou Could Be MMA’s Next Mike Tyson

Francis Ngannou is the best Cameroonian martial artist of all times. After Sokoudjou, Cameroon finally has a good UFC fighter. But this Cameroonian is breaking all the records and he has the best chances of winning UFC title!

He has an amazing score of 11 wins and 1 loss, with 7 knockout and 4 submission victories. Ngannou is known for the nickname The Predator and with a good reason. Only one fighter has ever survived two rounds against him, while the others were going down during the first or second round.

Francis Ngannou is an amazing boxer who tries to keep the fight standing. This is the reason why the crowd is amazed at his fights.He has never let the opponent last longer than 2 rounds in the octagon. Also known as the master of Savate, he knows to be dangerous from distance, too.

With a solid clinch game, he throws strong uppercuts to the head and body in the style of George Foreman. He also connects it with hooks. His most dangerous weapon is his left hook, while his right hook generates a stunning hitting power. The strong left uppercut, which is almost impossible to evade, is his most effective strike.

When it comes to leg techniques, a very strong right low kick and amazing left diagonal kick to the body are definitively his trademarks. He has a good knowledge of BJJ for a stand-up fighter, and his favorite submissions are kimura and armbar.

When on the ground, his barrage of hooks and uppercuts, which are sometimes followed by hammer fists, is worldwide known. It is believed his hammer fists are stronger than wrecking balls.

His fighting style can be described an extremely hard hitter with a brutal knockout power. The biggest vulnerabilities are clinch game and takedown defense. He is also weaker when on his back, but his rivals rarely reach that far – it is very hard to take him down without eating a punch or two.

How Did Francis Ngannou Start Fighting?

Ngannou was born in Batie, Cameroon. He had to start working in a sand quarry when he was 12 years old, due to the lack of funds. He was very poor when he was younger, and he was approached by many gang members. He wanted to pursue his boxing dream and he was persistently denying become a gangsta.

Despite he started training boxing at the age of 22, his family didn’t support him. He had to stop when he was 23 years old due to illness. However, he has never stopped dreaming of entering the ring and being in the spotlight. The wish for success and be the best kept his heartbreaking story possible!

After working various jobs for three years, Ngannou emigrated to Paris at the age 26. He was homeless with no job or money. The first whisper of hope appears when he started visiting free MMA lessons at MMA Factory, and he was coached by Fernand Lopez Owonyebe.

A homeless, but super strong fighter informed his coach about the boxing dream he had. But the coach introduced him to the MMA after he saw his striking potential and amazing level of power. A man of the street is given a chance to become a superstar!

He hadn’t got much choice in life since he had no money. However, he followed a vision, and today he is Heavyweight Title Contender No.1. In order to fully satisfy his dreams, a formerly homeless man has only one step remaining – the UFC Heavyweight Title!

Mike Tyson was his idol when he was younger. He was impressed by Mike Tyson’s heart. Mike Tyson was risking like the most unpredictable poker player, and this is what Ngannou does when he turns defense into offense.

The power of Tyson’s punches is also an important detail he copies in his fights. When going forward, he usually delivers left hook, but at first, he slightly crouches. This move was Mike Tyson’s trademark. On the other hand, left uppercut is a technique Mike Tyson used many times as a successful knockout against taller opponents.

If you take a look at Ngannou, when he throws a barrage, it usually consists of at least 3-4 hooks. The combinations of hooks, followed by one or two uppercuts, were also one of Mike Tyson’s most destructive weapons.

Ngannou is the owner of the highest punching power record among UFC fighters. His record is 129,161 units, which is far more than the previous record held by Tyrone Spong – 114,000 units. He could knock a bear out with that punching power!

Ngannou made his debut in Paris on November 20th, 2013, against Rachid Benzina. He won via surprising straight armbar in the style of an experienced BJJ black belt, and he was a pure striker at that time!

Zoumana Cisse is the only man who has ever defeated Francis Ngannou. He lost via unanimous decision on December 14th, 2013 in Paris.

The first Ngannou’s knockout is executed against Bilal Tahtahi in Levallois, France. He blew Tahtahi away with a stunning right cross. On the same day, April 5, 2014, Ngannou won Nicolas Specq via arm-triangle choke, showing his ground game is far from bad.

Luc Ngeleka is defeated via standing guillotine choke in the style of Alistair Overeem in Geneva on September 20th, 2014. A Cameroonian superstar demonstrated his superior strength.

The Predator dominated again in Bahrain on May 28, 2015. William Baldutti was heavily punched and elbowed on the ground, and the referee had no choice but to stop the fight. And we could see world-class slip from him for the first time!

Luis Henrique is the purple belt in BJJ, but this didn’t help him against Ngannou. On December 19th, 2015, the true power of his left uppercut was demonstrated. Not only he knocked Henrique out, but he blew him 2 meters away!

Maybe the only man who had a good chance of surviving three rounds against him was Curtis Blaydes on April 10, 2016. However, the referee stopped the fight at the end of the second round because of the cut.

The most brutal demolition was seen against the Serbian competitor Bojan Mihajlovic on July 23, 2016. He simply knocked him down via left hook and continued throwing hooks on the ground. The punishment lasted for more than 10 seconds before the referee stopped the fight.

The first Performance of the Night is seen against Anthony Hamilton on December 9, 2016. Ngannou surprised everybody via the spectacular kimura victory. And this move was the trademark of Royce Gracie – what a way to finish the fight!

Ngannou dominated Andrei Arlovski on January 28, 2017. Arlovski tried an overhand right, but Cameroonian superstar pulled back and countered it via stunning right uppercut, and the referee stopped the fight. The fight versus Arlovski was Ngannou’s second Performance of the Night.

The most surprising knockout was seen against Alistair Overeem on December 2, 2017. This UFC 218 event will always be remembered by the stunning left uppercut that put Overeem to sleep in the first round. 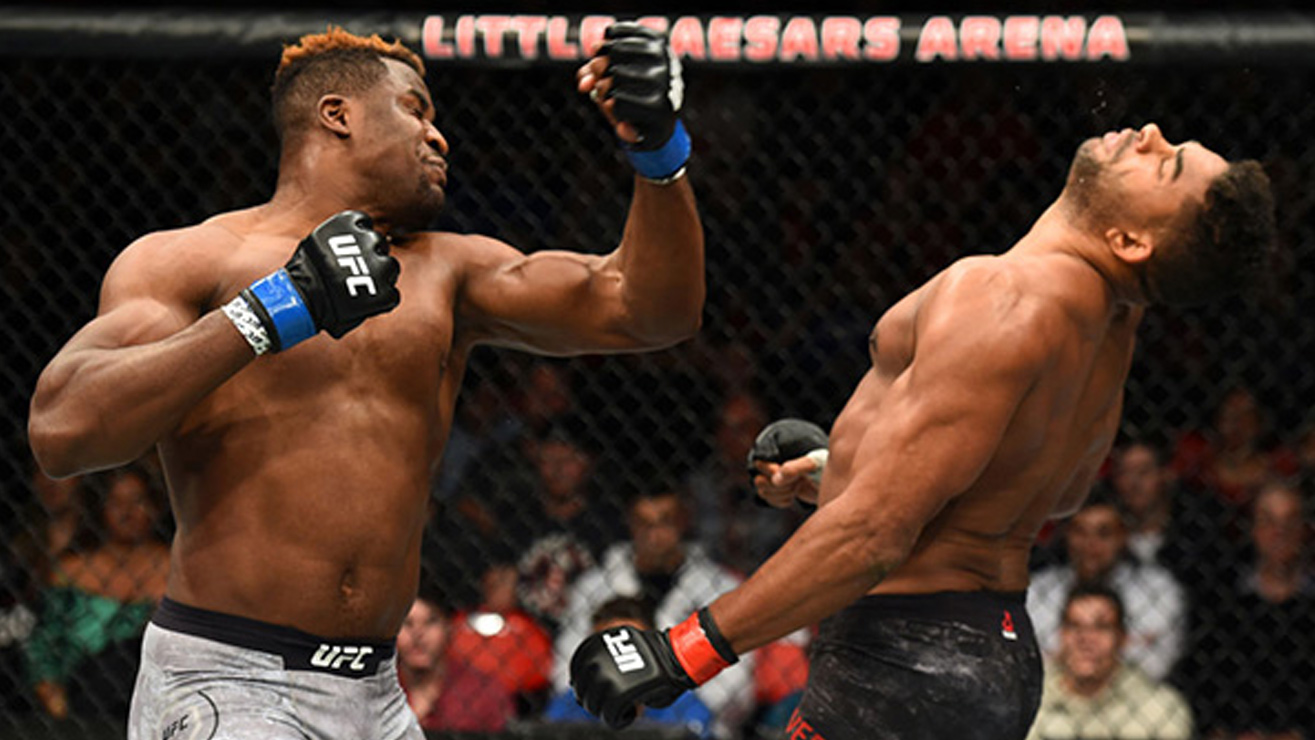 What To Expect From Francis Ngannou’s Upcoming Fight With Stipe Miocic?

Both fighters have amazing boxing skills, but Ngannou has stronger and more precise punches, and he might look for his chance from the long range. Miocic has better ground and pound game, and a better wrestling. Miocic’s transitions are very good.

Clinch game could be equal. Ngannou knows to deliver strong uppercuts and hooks, while Miocic usually trips and throws off the clinch.

If Cameroonian superstar is able to keep him in distance, he has more than 90% of chances to win the fight. However, if the fight goes to clinching, the champ could easily trip him or perform a suplex.

On the ground, Ngannou has a good offense, but his defense is critical. Miocic is good in defense and offense, so staying away from a ground game is the best thing the challenger could do if he wants his dream come true.

If the fight goes to the later rounds, this will not be good for Ngannou. His longest match lasted ten minutes, while Miocic already has one 5-round match and three 3-round matches.

Both fighters have amazing knockout power. You can hardly expect scorecards here. The fight is set for January 20, 2018, in Boston, Massachusetts. Someone is going to go down here, maybe even in the first round!

Video: Gabi Garcia only misses weight by a mere 26 pounds, is our fav freak-show fight in jeopardy?
Read Next Post →
Click here to cancel reply.