We all knew the minute after Brock crushed Mir with this pots and anvils he calls hands, in order to ensure his dominance he has to face Fedor. The entire MMA world knows this fight would be like that scene in Matrix Reloaded where those two semi-trucks collided with each other and crushed like some german accordian. About a month ago we created a list called the ‘Top Ten Reasons Brock vs. Fedor will never happen‘ and the number one reason was that if Fedor actually won and then went back to the M-1 Global/Affliction/Strikeforce triad, it would destroy the UFC. Having the best fighter in human history not in your organization isnt something that you would brag to your mom and dad.

Even though Atencio says that he has Fedor Emelianenko signed until 2012, White says that he’s going to work out a deal to get Fedor in the UFC to face Brock Lesnar. Yeah all of that was paraphrased so here is what he actually said (so we won’t get sued):

“Eventually Fedor is going to be here…I want Fedor. I want him to come of the UFC. We’ll end up getting that deal done. And then we’ll do Brock vs. Fedor, and it’ll be a huge fight.”

Fedor has already said that the contracts that were offered to him by the UFC were pretty weak. I’m one for Tom Atencio getting in the cage with Dana White to see who gets to keep The Last Emperor. Loser has to give up one heavyweight and one lightweight to the other guy and as a bonus…they have to cook pancakes for the other guy. [Source] 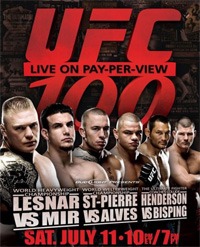