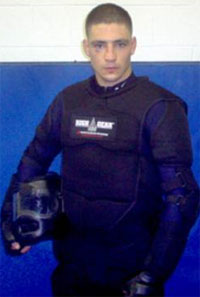 By the end of last night, Diego Sanchez looked like someone hacked into his genetic code and replaced it with a boot-leg copy of Doom. Looking at Diego’s face last night was pretty fascinating. You got to give it to a guy that continues to push forward despite his lip falling off his face. It was pretty intense stuff and even Dana White said it was the most brutal beating he’s seen in 10 years.

“In 10 years of being in this business, I don’t know if I’ve ever seen anybody more busted up than Diego is right now. His whole lip is split open in half, in two different places. When I say split open, it’s torn down to this stuff down here [indicating a point on his chin]. His forehead is as open as [Marvin Eastman], the kid that Vitor Belfort kneed [at UFC 43]. They pulled that thing wide open. His face? I think his nose is broken. I don’t even know how Diego kept coming forward. He’s a tough kid, man. I’m almost positive his nose was broken by the third round. That Tony Robbins [expletive] works.”

Tony Robbins, this friggin guy. Dude has over a million people following him on Twitter and only one of them nearly went the distance with the UFC lightweight champion. Guaranteed if you saw that person this morning, you would not recognize him. [Source]