Dana White says Houston Alexander had ‘the worst gameplan ever’

We all have to admit, Houston Alexander won the first round based on octagon distance traveled. Dude put a clinic out there for all future New York marathoners. Houston Alexander pulled a NASCAR and circled left the duration of the bout, a strategy that only Jeff Gordon could be proud of. A few kicks were thrown, Kimbo landed that devastating slam and the fight was over. Kimbo won the unanimous decision and Dana White had to throw his infamous two-cents in:

“I don’t know what Houston Alexander’s corner was doing, but that was the worst game plan they could have ever come up with…. I am not sure if Kalib Starnes was training him or what, but that wasn’t the Houston Alexander I had seen fight before. I don’t think I have to apologize to Kimbo. I helped him. I said what I did and he did the thing athletes do: He went out there and he worked and he made himself better. He deserves credit. He took me up on the offer I made, did what he had to do and went out and beat a legitimate UFC fighter.”

I guess all Dana White needs to do is throw a Kalib Starnes vs. Houston Alexander match and third-world countries could use the energy produced from their feet to power small villages across the world. [Source] 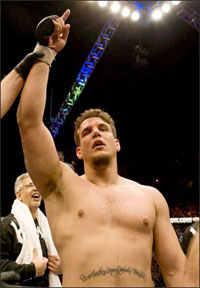 Frank Mir is still looking for a third fight with Brock Lesnar
Read Next Post →
Click here to cancel reply.