Ngannou was riding high after his first-round knockout of Alistair Overeem at UFC 218 back in December; some were referring him to be the Mike Tyson of MMA.

But that hype train derailed when Stipe Miocic scores a five-round unanimous decision win over Francis at UFC 220 back in January, and in last night’s showdown, he just landed 11 strikes over the course of 15 minutes.

Ngannou’s victory over Alistair Overeem and praises he got all went through straight into his head; his ego was just so out of control.

”I think that [Ngannou] had a pretty quick rise here and obviously the fight over Alistair Overeem catapulted him, everybody was talking about him,” White said. “I thought he was going to be the next [big] guy. I think his ego ran away with him, big time. I can tell you that his ego absolutely did run away with him. The minute that that happens to you in the fight game, you see what happens. You start to fall apart.”

”I had some personal encounters with him, as did other people in the organization, and this guy’s ego was just so out of control,” White continued. “It’s like, before the Stipe fight, he took off and went to France. Didn’t even really train for that fight. And you see the results. Well, he came back and did train [this time], but ego is what hurt Francis Ngannou.”

Derrick Lewis who also has a plethora of KO’s in his resume only landed 20 strikes and pick up a lackluster win. White didn’t blame Lewis, who also had a history of back problems.

“He’s a fun guy – he’s funny,” White said of Lewis. “When he gets in there and throws, the fights are exciting. But he always has problems with his back. And that’s going to be a problem. You don’t want to go in there with a bad back against [New UFC heavyweight champ Daniel] Cormier. But I like him, and I don’t think his stock dropped at all.

“Tonight is the last time he was in a boring fight. The card was so good, people will forget about that. And the heavyweight championship was so good, it was immediately erased from people’s memories.”

What do you think of Dana White’s comments on Derrick Lewis and Francis Ngannou’s strange fight? 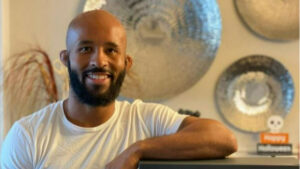