One of the biggest storylines after this past weekend’s UFC event was Max Rhoskopf quitting in between the rounds of his UFC debut. This situation has caused lightweight contender Dan Hooker to speak up and mock him for this.

Over his tenure in the UFC, Dan Hooker has made a name for himself based on his unbelievable toughness. A recent example of this was in his last contest, a grueling war with Paul Felder that he won. However early signs of this were seen during his losing effort against Edson Barboza, showing that even when he is getting battered he will not give up.

Unfortunately this type of unyielding toughness is not always seen in the Octagon. A prime example of that went down over the weekend, at UFC on ESPN 11. Making his UFC debut, lightweight competitor Max Rohskopf was unable to answer the bell for the third round, quitting the fight.

This situation caused sympathy from some people, and scrutiny on the fighter’s corner for others. Not Dan Hooker however, who instead took to his social media to address the situation. Posting a now deleted message to Twitter, he took the opportunity to mock Max for asking his corner to throw in the towel.

“How do you get into the UFC without realising you’re made of marshmallows? 😂 @seanshelby” 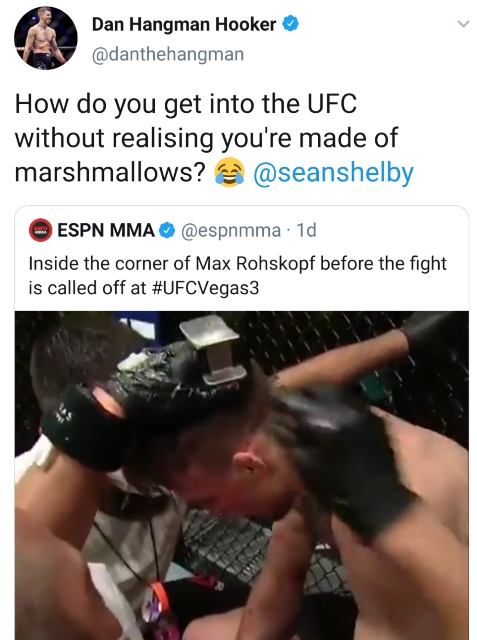 This is a sentiment shared by some, and shunned by others. While it is not hard to find someone who shares Dan’s opinion in this situation, others are more understanding of Max’s predicament. Those people point to the fact that this was his first fight in the promotion, and he took it on short notice on the tail end of a global health crisis.

What do you think of this comment from Dan Hooker?