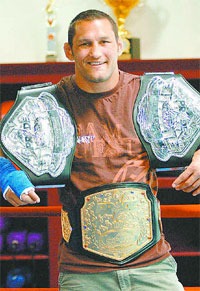 First off I would like to say that requesting a million dollar signing bonus is something everyone should attempt at least once in life. Your next job application, in the ‘About me’ box make it abundantly clear that you will not step foot in the office until the company accepts your $1,000,000 bonus agreement. Cop pulled you over and wants you to write your name on a ticket? Screw it. Without a signing bonus, tell that cop that you’re going to Strikeforce. If Dan Henderson does it, so can you (besides the whole winning three Pride FC title belts at the same time). It looks like the reason UFC wouldn’t come to an agreement with Hendo is that the dude wanted loot, a lot of loot.

InsideFights.com has also learned that Henderson and the UFC are “far apart” on contract negotiations. Henderson is asking for a contract that will make him one of the highest-paid fighters on the roster, and the UFC offer is said to be considerably lower. The key sticking point in the negotiations has been Henderson’s request for a seven-figure signing bonus.

Both Henderson and the UFC have exhibited little desire to budge on the negotiations.

Henderson has repeated throughout the negotiation period that he has zero interest in going to Strikeforce. But sources close to his camp indicated to Sports Illustrated tonight that even though the UFC is his first choice, Henderson is now open to leaving.

We’re not sure if any organization out there can front a million dollar signing bonus. There was Affliction who dropped 1.5 million on Arlovski to get in the ring with Fedor for…one round. Unfortunately that organization is…well, it’s a clothing brand (again). Good luck Hendo on your search and if we ever kick it, hook it up with some fish tacos. [Source]