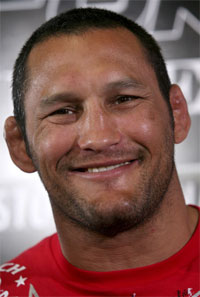 In addition to landing nuclear warheads on a variety of chins, Hendo knows how to make a mean fish taco. At UFC 100, my friend CJ bet $80.00 on Bisping solely based on the fact that he played UFC Undisputed the night before and beat Henderson in an unanimous decision. The guy used a videogame to justify his gambling addiction. That’s actually sort of baller. He also claimed that ‘Stanky Leg‘ was the best rap song ever made. That’s the exact opposite of baller. If you listen to a song that begins with ‘Stanky’, you’re just setting yourself up for disappointment. Somewhere in-between my friend CJ pushing the worst song ever made and dropping $80 at Las Vegas bookie, Bisping got knocked out at UFC 100. But not the normal knock out that LL Cool J was talking about. Bisping traveled to the 8th dimension. Tonight, at Strikeforce: Henderson vs. Babalu, Dan Henderson sent another friendly reminder why he is still one of the most feared strikers in MMA.

If Wikipedia ever created an entry entitled ‘Violent Ground and Pound’, Dan Henderson’s knockout of Babalu Sobral would be right up there. Dan Henderson really didn’t really throw punches, they were all just sort of waiting for Babalu like some bad fruitcake your Aunt made for you at Christmas. It was nasty, forceful and probably tasted like vinyl and rubber. Babalu played it the best he could, keeping his distance and tagging Henderson whenever he could but — it’s Dan Henderson. Props to Hendo on a great win and making the commitment to stay at 205.