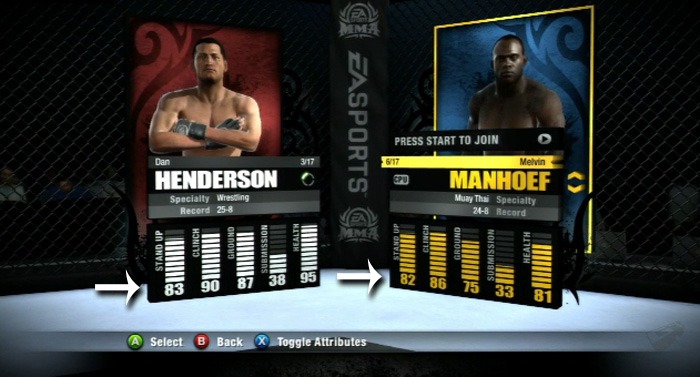 A few days ago the infamous ‘WTF flag’ was raised high when this picture of EA Sports MMA’s fighter selection screen leaked on the internet. From this screen capture, it appears that Dan Henderson slightly edged out Melvin Manhoef in the striking department which seems somewhat absurd considering Melvin Manhoef is a K-1 level striker, has the highest KO ratio in all of MMA, is the only person in the history of MMA to knock out Mark Hunt and he did it in only eighteen seconds. I could bring up the whole K-1 2009 GP bout against Remy Bojansky, but we all know who really won that fight.

Melvin Manhoef is our dude, we even sponsored him in his Strikeforce debut. So when we saw that Melvin Manhoef’s striking wasn’t in the 305% range (where it rightfully belongs), we asked Jason Barnes, EA Sports MMA’s creative director, to give us a reasonable explanation why Dan Henderson’s striking is rated higher than Melvin Manhoef.

“When determining Melvin Manhoef’s striking ratings, we factor in takedowns and takedown defense into the Stand Up overall. Takedowns are not his forte and he’s not efficient at sprawling – so all those factors are taken into consideration when we develop a fighter’s overall Stand Up rating. For a middleweight he has max power in hands and his feet.  He’s also one point shy of max on speed for punching and kicking.  He is in the middle for punch and kick range.

Jason Barnes mentioned they viewed a lot of footage of all the fighters on their roster and received feedback and insight on ratings from people who have been in the MMA business for quite awhile including John McCarthy, Frank Shamrock, Bas Rutten, and Mauro Ranallo. He also said that EA Sports MMA revisited and revised fighter ratings several times during the last six months (including revising Fedor’s stats after his loss against Fabricio Werdum).

Personally, I still think Melvin Manhoef has the ability to rip through the fabric of time and space with one overhand right.