Pic: Cro Cop Posts That Wanderlei Silva Pulled Out of Their Rizin Fight, Says He’ll Slap Him Like a Bitch

Why, MMA gods, why? Cro Cop just revealed this morning that Wanderlei Silva messaged him to reveal he would not be fighting him in RIZIN. Silva has not said anything about this publicly, neither has RIZIN, but Cro Cop has and he is really, really, fuckin’ pissed.

He’s posted two messages on Facebook saying he’s lost all respect he had for Silva and that he better now come to the tournament to even watch it or it will be a fight right then and there. He also details the pain he is going through and sacrificing to make this fight happen and doesn’t understand how Silva will not do the same thing. 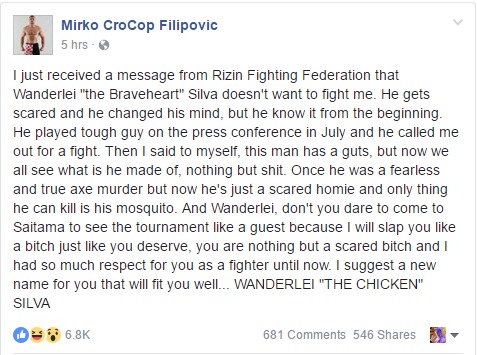 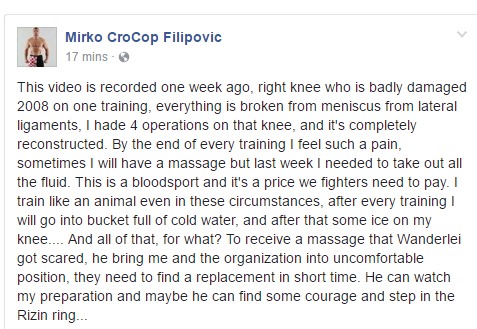 Holy shit. Tell us how you really feel, Cro Cop? Now he wants to smack Silva like a bitch if he shows his face at the tournament. Wanderlei can’t make friends in Rizin, can he? Not only does he have Charles Bennett gunning for him, but he’ll have to watch his back for Left Foot Cemetery at every turn.

This was just recorded a couple of days ago and a fully-supplemented Silva was cocked, locked and ready to rock looking like damn TRTY Vitor Belfort.

So… what the hell happened!? Show us the messages Cro Cop!
https://www.youtube.com/watch?v=XBvwmKJxCjM

Tonya Evinger is Back Being Invicta Champion and Doesn't Give a Shit What You Think
Read Next Post →
Click here to cancel reply.