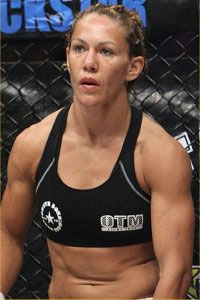 If you ever wanted to die from massive heart attack, bet twice of your net worth on a Monday Night Football game and let Mike Patrick commentate. He’ll make your heart volcano out of your mouth by announcing plays like “Terrell Owens catches the football in the end-zone for the touchdown! Eagles win the game!…(you accidentally flip over the pizza box in excitement)…no he stepped out!”. If you ever figure out how to build that time machine, you should go back to 2005 and bet half your month’s rent on a game commentated by Mike Patrick. It will be the most depressing three hours of your life.

Cyborg’s manager apparently graduated from the school of Mike Patrick. In an interview with MMAJunkie, he told them that Cyborg will probably not be able to defend her title on November 7th…but maybe she will.

“It’s unlikely that Cris will be fighting on [Nov. 7] but still possible“

“I’m awaiting her return from Spain to get her assessed by a doctor here…Out of respect to Strikeforce, CBS and Cris’ potential opponent, we alerted them to this issue early so as not to interfere with pre-production, preparation, etc.”

Damn. It looks like we’re going to have Erin Toughill vs. Marloes Coenen slated for November 7th at Strikeforce: Fedor vs. Rogers…maybe (but maybe not). [Source]

Owner of MFC says he will beat Strikeforce, M-1, Dream...and says he has a plan for UFC
Read Next Post →
Click here to cancel reply.