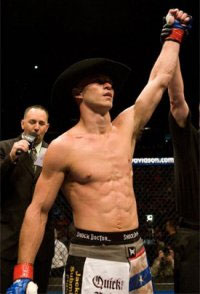 Wishing death on someone is never a good thing when you get paid to place that person under the same conditions that resemble death. That’s like a chef holding up a baby and saying the words ‘I just want to eat you up’. Technically, the chef has all the available skills to cook the baby up in a nice marinade and serve it in reasonable portions. Therefore, Cowboy Cerrone hoping that Jame Varner will be the first death in MMA on TapouT radio last night is not necessarily a positive thing. Cowboy Cerrone pulled a Frank Mir.

“I hope my emotions have everything to do with this fight. I hope I’m [expletive] fired up and all I want to do is go out there and kill him and that’s what’s going to get me going in the first round. I want to come in that first round and rip his face off…I hope my emotions drive me, I fight better under emotions. Ask Leonard [Garcia], when I’m hot and some new guy comes in the gym and wants to throw down, that’s when I do my best. So I hope my emotions take over and I just kill this dude. I hope this is the first death in MMA.”

Since the statement, Cerrone has already reprimanded himself by publicly apologizing to Jamie Varner regarding his comments on last night’s broadcast. Cowboy Cerrone did not, however, apologize for hating every hair follicle, white blood cell and appendage of Jamie Varner. [Source]

ESPN and Stubhub really want you to watch Frank 'Fir' vs. Anthony Perosh at UFC 119
Read Next Post →
Click here to cancel reply.