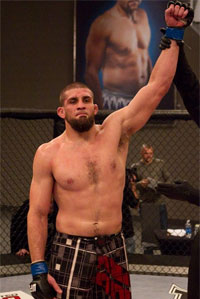 Court McGee came back from the brink of death to win The Ultimate Fighter Season 11 and all you did today was make toast. Shame on you and your meaningless life when compared to that of Court McGee. Ever since he clinically died from a drug overdose just over three years ago, McGee has dedicated his life to MMA and with a record of 11-1, Court officially realizes that fighting is vastly superior to that whole ‘intravenous heroin addiction’ thing.

Maybe that’s Court McGee’s thing. Getting defeated by an external force early on, only to come back and win in some extraordinary fashion. Tonight, it happened again and it left most people who watched the Spike TV preliminaries temporarily in the ‘Wow!’ position.

Early in the first round, Ryan Jensen rocked Court Mcgee with a right hook, which was partially absorbed by the small mammal hiding on McGee’s chin. Court regroup, kept his distance, and systematically dissected Ryan Jensen throughout the fight. If cardio is king, Court McGee runs some feudalistic society in his hometown of Ogden, Utah. Mcgee managed to catch Jensen in an arm triangle in the third round to secure his eleventh win in his short MMA career. Props to Court McGee and if you’re in the Southern California area, you should come down to the official UFC 121 MiddleEasy after-party at The Blue Beet. You can kick it with Court McGee and if you come wearing a Green MiddleEasy shirt, I’ll get whatever liquid substance you desire.