So immediately after UFC 165 I received emails and tweets about FightMetric allegedly altering fight stats in favor of Jon Jones. Initially I thought nothing of it, and days later my opinion still hasn’t changed. However since people have been abuzz about this entire ‘FightMetric UFC 165 conspiracy,’ I thought it was only fair that it make MiddleEasy — as every appropriate MMA conspiracy theory has in the past.

The root behind this conspiracy theory is actually two-fold. A site called ‘MMAPlanet‘ claims that FightMetric actually skews their statistics pretty frequently, but only if a UFC bout meets the following guidelines (quoted directly from the site):

So it’s clear that at the very heart of this FightMetric conspiracy theory is a strong claim that stats are altered to favor American fighters. Interesting.

A phone screen cap has also been floating around the internet showing the finals stats of the main event of UFC 165 with Jon Jones winning the unanimous decision, but Alexander Gustafsson significantly out-striking him.

Now a photo of the final, or ‘edited,’ stats show that Jon Jones had more strikes than Alexander Gustafsson, leading some people to believe that FightMetrics removed 77 strikes from Gustafsson and added 17 to Jon Jones, representing a 54% shift in strike statistics. 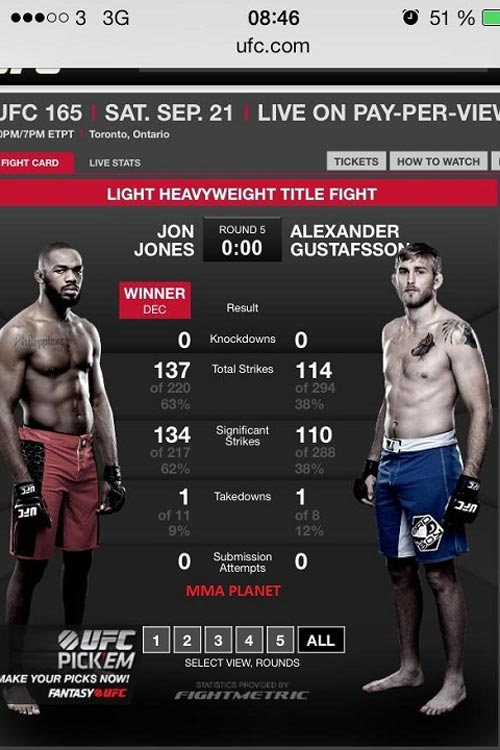 OK, so let’s play along in the belief that FightMetric is run by a crew of shape-shifting reptilians that are out to control the planet through means of mathematics. If they did add strikes to Jon Jones’ stats, how would that possibly change the outcome of the judges’ score cards? Was the alteration just a tool to get people to accept the unanimous decision in favor of Jon Jones? If FightMetric did hold a conspiracy, then it’s a dumb one — and they should be banned from making conspiracies from now until Miley Cyrus turns into a confused, middle-aged woman.