From a Dublin plumber to a UFC star Conor McGregor has come a long way from the being the boy raised in Crumlin and Lucan. The first UFC fighter to hold two weight titles simultaneously, he crossed the divide into boxing after taking on Floyd Mayweather under Queensberry rules – losing by a 10th-round TKO. McGregor now finds himself as the king of combat sports, living a lavish life.

Conor McGregor is one of the most dominant fighters alive.

Despite all, Conor McGregor lately made some headlines for all the wrong reasons outside the octagon.

In this article, we will count down Mcgregor’s some of the most controversial moments.

McGregor was in attendance at UFC Fight Night 118 event in Gdansk, Poland, to support SBG Ireland teammate Artem Lobov. “The Notorious” entered the venue just before Lobov’s fight, carrying a drink in hand. He was filled with energy, enthusiastically coaching Lobov during the unanimous- decision loss to Andre Fili.

At one point he was ordered to restrain himself by referee Marc Goddard. McGregor consoled Lobov as they walked backstage following the loss, and that’s where he was caught on camera repeating a commonly used homophobic slur multiple times calling Fili a “f**g*t.”

Later, he has publicly apologized on The Late Late Show while promoting the release of his new film Conor McGregor: Notorious.

“I’m human; I slip up, I say stupid things every damn day. All I can (do) is hold my hand up and apologize if anyone was offended,”

The news of the impending Floyd Mayweather vs. Conor McGregor super fight was barely 24 hours old when a boxer Heerdan released footage of him sparring in boxing with McGregor. The video, which was filmed last year, shows the boxer, Chris van Heerden, getting the better of McGregor during the session.

At the time McGregor was looking to work on his boxing skills ahead of his rematch with Nate Diaz, and Heerden agreed to spar with him in Los Angeles, believing their sessions would be for their eyes only.

Van Heerden claimed that he did not offer permission to either his gym or McGregor for anything that was recorded to be distributed in the public domain. But it was soon in the hands of TMZ, which did just that.

While it came as a shock, one that compelled him to leave the gym permanently, van Heerden said that the great bombshell arrived when McGregor’s website, the MacLife, also posted footage of their time in the ring.

Chaos followed after the Brazilian referred to himself as the ‘King of Dublin’ in McGregor’s hometown where they were promoting their highly anticipated Las Vegas clash back in 2015.

That brought an instant reaction from McGregor, who yelled back, “you’re looking at the king of Dublin!” while leaning back and slamming his feet up on the desk in front of him.

Only UFC president Dana White stood in between the warring pair before it could escalate further, though the crowd were clearly loving it.

Allegations Of Racism On Mcgregor Vs. Mayweather World Tour:

Conor McGregor raised a few eyebrows on during the first leg of his World Tour Press Conference, designed to promote his upcoming boxing match against Floyd Mayweather Jr. on Aug. 26.

During the tour, both athletes made controversial remarks that they would later regret.

While Mayweather was juking and jiving onstage, Mcgregor grabbed his subsequently-silenced mic and shouted: “Dance for me, boy!” this drew a fair share of backlash from the fans in attendance.

McGregor was unfazed by accusations that his remarks were racially insensitive, revealing that he is, in fact, half black.

McGregor said during his World Tour Press Conference in Brooklyn ”I’m half-black from the bellybutton down,” also stating that this was, “a present for my beautiful, black female fans.”

Mayweather was unimpressed with his remarks and said he might regret this later.

Mcgregor is famous for making controversies; no doubt Irishman refused to show at up at a UFC 200 pre-fight press conference to promote his headlining rematch with Nate Diaz at summer of 2016.

Because he couldn’t afford the time, he would need to leave his training camp in Iceland for a series of promotional appearances for the card.

UFC president Dana White said McGregor had been pulled from the marquee card because he refused to come to Las Vegas for promotions.

Mcgregor in response tweeted “I have decided to retire young. Thanks for the cheese. Catch ya’s later.”

That’s a historic UFC 200 event failing to live up to the hype, regardless all, Mcgregor agreed to fight Diaz at UFC 202 a month later, and made record-breaking PPV.

One of McGregor’s more stunning criticisms during a wild, raucous world tour stop was when he ambled over to Showtime Sports executive Stephen Espinoza on stage and called him a “f*cking weasel” twice.

He was upset that his mic was cut off during the MayMac World Tour stop in Los Angeles. Espinoza said that it was technical difficulties at Staples Center and not a Showtime choice to mute the Irishman.

McGregor said “f*ck Showtime” at a press conference after the tour stop.

”While we’re at it, f*ck Showtime too,” McGregor yelled as he walked up to Espinoza, who was also seated on-stage“You little weasel. Look at you, you little f*cking weasel, I can see it in your eyes, you’re a f*cking bitch. Cut my mic off? Cut the champ’s mic off? Hell no. You f*cking weasel!”

That was unnecessary drama, but you all know Mcgregor was an unstoppable force for his billion dollars super fight with Money, no doubt such attitude comes out naturally.

Paulie Malignaggi showed up in Las Vegas to spar with McGregor for the second time in preparation for his super fight with Floyd Mayweather. A contentious 12-round session followed, and an image of Malignaggi on the floor was released by McGregor’s camp which angered the retired boxer.

Malignaggi immediately disputed that he was pushed down and that the image didn’t represent what McGregor’s camp was putting on that Conor dropped him. Malignaggi demanded that the full, unedited video of the 36-minute session be released so everyone could decide for themselves what happened.

The UFC champ spoke of his version of events at a public workout in Las Vegas and revealed Malignaggi quit because he was “flattened” and was “badly concussed.”

That was the final hay for Malignaggi, who stormed out on McGregor’s camp and has since repeatedly denied that the Irishman got the better of him, despite several others in attendance that night claiming otherwise.

McGregor showed up nearly 30 minutes late to the UFC 202 pre-fight press conference for his revenge bout against Nate Diaz. It did not take long for him to stir up some trouble.

After the two exchanged expletives and middle fingers, McGregor and Diaz’s crew engaged in an epic water bottle-throwing brawl. While UFC President Dana White begged them to stop as he grabbed full cans of Energy drink and tossed them up at Diaz and his crew.

McGregor telling his rival arch to “get the f*ck out of here” and expressing his infamous catchphrase, “you’ll do nothing!’”

Nate Diaz has been fined $50,000 by the NAC for his part in a bottle-throwing incident with opponent McGregor at a press conference before their UFC 202 bout. While Mcgregor also subsequently fined and sentenced to the community for their reckless behavior.

Fast forward four years, and it seems the UFC’s biggest star is rapidly spiraling out of control.

A well-known Irish celebrity has assaulted a close associate of a senior Kinahan cartel henchman in a south Dublin pub.

According to a different media outlet and sources that McGregor may be in a spot of bother with the Irish Kinahan cartel after having punched a senior associate in a south Dublin pub. 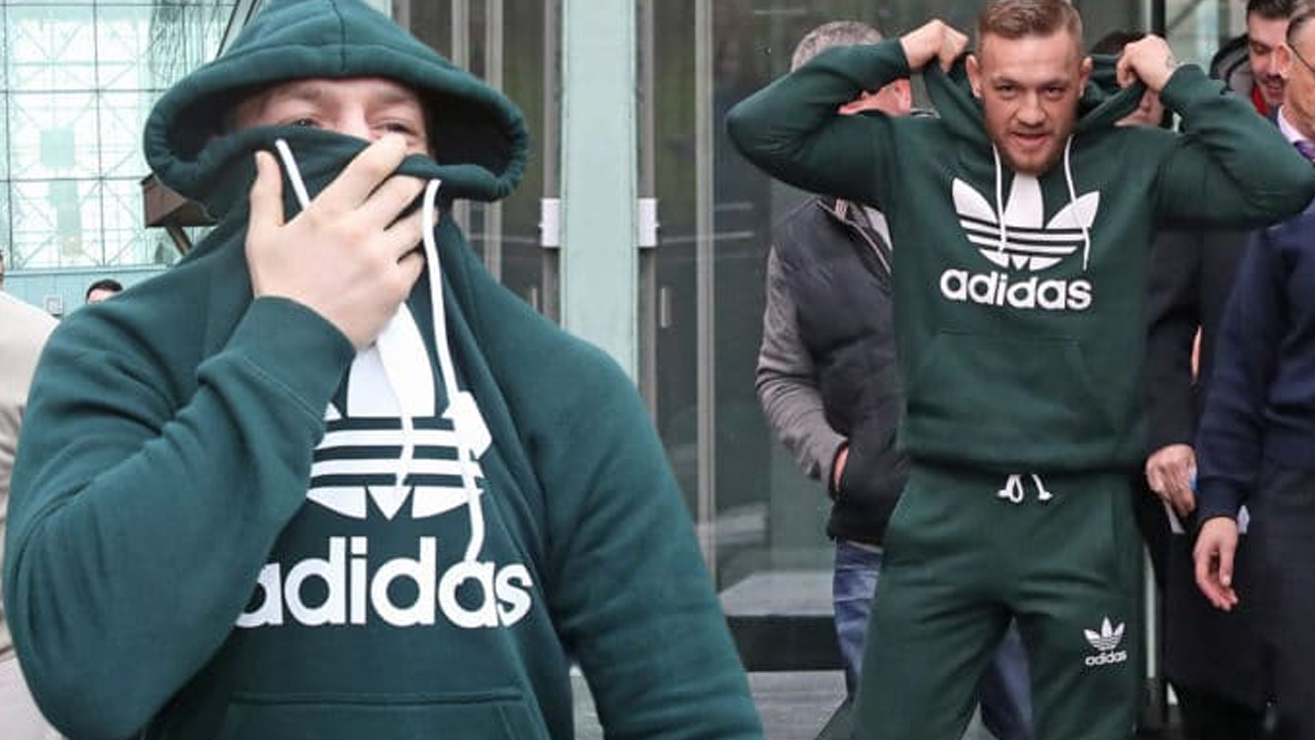 It is alleged that a man aged in his fifties who is very well connected to a convicted drug dealer, thirty-five-year-old Graham “The Wig” Whelan, was punched. Whelan is believed to have amassed made a fortune by allegedly running guns and drugs throughout England and Ireland.

Shortly afterward, McGregor has been on the receiving end of threats from some pretty bad guys after he mixed it up at a pub, later his father to speak out in the media in an attempt to downplay the rumors.

Moreover, he was due in court couple weeks back to face a third charge for speeding after he was cited in March for driving 98 mph in a 60-mph zone on the road outside Dublin. The thing is, McGregor initially failed to appear, which angered the judge. While he was leaving the court, boldly stated to reporters “come and get me.”

McGregor was in attendance at the Bellator 187 event on (Fri., Nov. 10, 2017), and decided the best way to celebrate fellow Irishman Charlie Ward’s win over John Redmond in Dublin, Ireland, was to jump the cage and go berserk.

At some point, McGregor left then ran back into the Bellator cage zeroing in on none other than referee Marc Goddard. He can be seen putting his hands on Goddard multiple times, even pushing him before being swarmed by officials.

McGregor would later publicly apologize in a social media statement, said, “I’ve always learned from my mistakes, and this will be no different.”