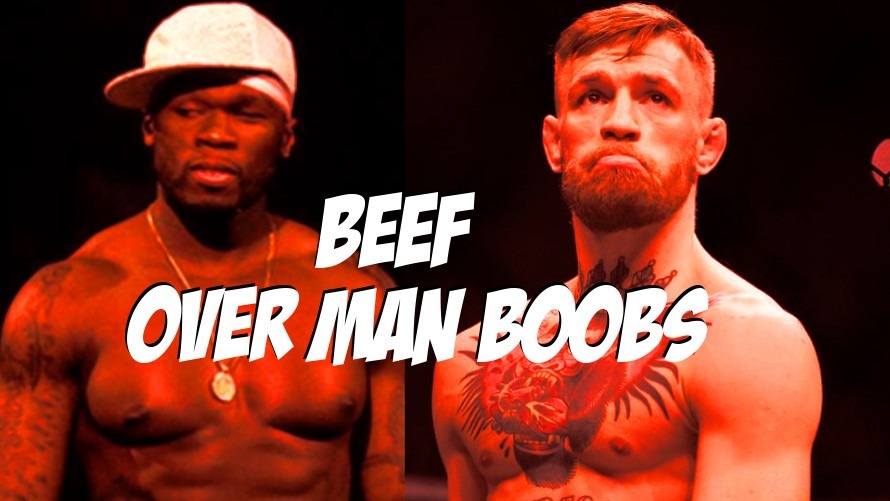 Conor McGregor is a man of many layers. At times poetic and nearly philosophical, he can discuss the ethos of fighting with such a brilliant honesty that it elevates what fighting can be. His clean perception of truth is genuinely illuminating.

And at other times, Conor McGregor is a caricature of a wanna-be gangster from a bad 1990s movie.

And at other times still, “The Notorious” Conor McGregor combines those two divergent impulses, and somehow, he becomes the most bizarre, unexpected, and hilarious shit-talker popular culture has ever produced.

So when McGregor turned his sights on one Curtis Jackson (AKA “50 Cent”), he unloaded a volley of shit-talk that is really just a master craftsman preforming in his prime. Poor 50.

The fact that McGregor uses International Women’s Day as an opportunity to point out 50 Cent’s bitch tits is absurd beyond parody. It adds such mad-hat twists and turns to this whole caption.

In one moment you think it’s almost a genuine mistake. Why would Conor’s social media team accidentally have 50 Cent on their obligatory IWD post? And then in the next sentence you are immediately questioning why they would ask girls to take their tits out. It’s such an unexpected follow up. It gets so crazy, so quickly. I was immediately relieved when I realized he was mocking 50 Cent. Somehow, if Conor McGregor is going to encourage women to take their tits out for International Women’s Day, I’m much more comfortable with it, only if he said it to make 50 Cent uncomfortable. I feel like the women of the world agree that 50 Cent must be humbled at all costs.

McGregor ices this cake off by declaring his love of 50 Cent immediately after telling him to fuck off, and then mentioning that a few of his older songs are still good. Complete the petty one-upmanship by tagging Beats by Dre, Conor’s new sponsor, and damn Curtis Jackson, you have just been knocked down in the very first round of this verbal sparring.