Conor McGregor States Out His Terms For Next Fight

MMA superstar Conor Mcgregor may have lost his last bout which was his first professional boxing debut against Floyd Mayweather, but that doesn’t stop him from arising again. On Friday night in Glasgow, he laid out all his terms for his next fight. Shortly after, rumors were surfacing that Conor will be returning to the cage on December for UFC 219, but President of UFC Dana White stepped in and shut down the speculation by saying “NOT TRUE” on Sept 24.

Not true AT ALL

Conor Mcgregor’s Coach John Kavanagh also played down some preferences and saying “The Notorious” next fight would be Nate Diaz. McGregor mentioned the long list of potential prominent figures from the MMA and boxing as an option in his kitty.

“I’m sitting on a loss in my mind, so I’m just seeing what options are there,” McGregor said, “An option; there’s an interim belt on the line right now – that’s an option,”

“Of course the Nate Diaz trilogy fight is there. Maybe one of these boxing guys…maybe Malignaggi would come over and do an MMA bout…or Floyd, maybe I could entice Floyd back.

“We could either do a rematch in boxing, or like he said originally, we’ll do an MMA fight next. They are the options that are on the table for me right now.”

Conor Mcgregor went into further details by saying, he is looking forward to the upcoming interim lightweight fight between Ferguson (22-3 MMA, 12-1 UFC)and Lee (16-2 MMA, 9-2 UFC) at UFC 216 which takes place next week.

“Too many of them pull out right at the wire and we’re still not at this fight yet, so I’m just going to pray that this one goes ahead. Of course Nate is still there waiting, but he’ll be left waiting until we figure something out.”

Conor further added: “I’m just going to put a few options out there and see what bounces back. It’s got to excite me, let me see what these two fools do this weekend. We’ll see what the energy is like.” 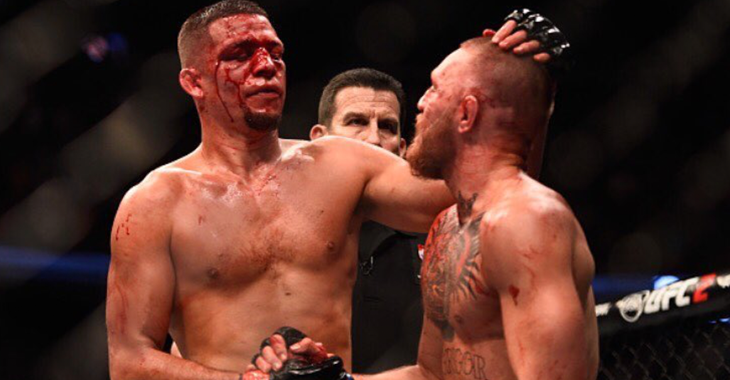 While Dana White mentioned the possibility of a rematch between Conor Mcgregor and Khabib Nurmagomedov (24-0 MMA, 8-0 UFC) in Russia and Conor agrees on it. Conor is also interested in showdown of Justin Gaethje (18-0 MMA, 1-0 UFC) and Eddie Alvarez (28-5 MMA, 3-2 UFC)

“Again, (Khabib) that’s another option. That’s definitely an option. As I said earlier about the other two that are fighting, I’m just happy to see them fighting.

“There’s also that Gaethje guy (mispronounced), he’s fighting another guy that I fought for the title, Eddie Alvarez. I’m looking forward to seeing what happens there. He’s an undefeated fighter and Eddie could come back.

“I just want to see them fight. They’re talking about me fighting? I’m the one going into other peoples’ domains and fighting. They’re sitting on Twitter typing away and complaining. I’m in there trying to do it.”

The lightweight champion lurk on the topic of Khabib and said

“Obviously, Khabib in Russia would be a great one. It would be a crazy one. We’ll see what happens. I’ll need to see him make weight though. There’s no way I’m going over there and he’s not making weight. I need assurance.”

Pic: Odds have been released for a Conor McGregor vs. Michael Phelps race and they're not that bad
← Read Last Post