Full Video: Conor McGregor Reaches Absolute Peak in Presser That No One Got To See

Conor McGregor opened his mouth like Mario in the red and white outfit, then ran around spitting flames all over everything. Except he didn’t run around, he sat in a chair with a pink polo and his big nerd glasses not giving a shit like a don and did whatever he wanted. This was a press conference just for him, that’s it. No fancy graphics, no arena, this was just McGregor is small chair sitting in an empty makeshift gym… And it was better than any other press conference. 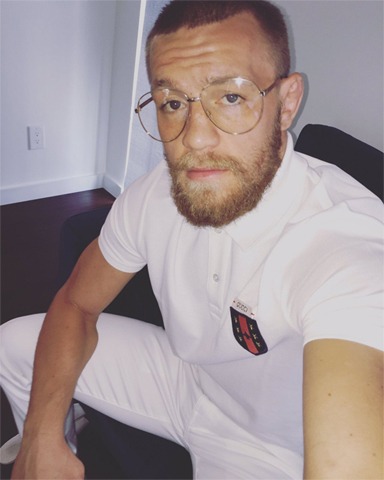 It was only criminally under promoted, and was only accessible live on Periscope and UFC’s Facebook account. The footage was gone as soon as the broadcast ended. Luckily, in our digital age this 14k gold McGregor footage can be seen by the public and holy shit, does it need to be seen. Just watch this appetizer of McGregor continuing his war of words with the WWE locker room.

Conor responds to the WWE superstars that have responded to his comments on social media. #UFC202 pic.twitter.com/ru1Eu7o8pz

After blasting “40 year old in a headband” John Cena and calling The Rock, Stone Cold and Ric Flair “cool motherfuckers”, McGregor just kept the crazy train rolling off the rails. McGregor answered every question and spoke with no hesitations wtih no topic was sacred.

From Georges St-Pierre’s return, Olympics, the Nate Diaz rematch and everything in between, no one can keep attention quite like McGregor. The talk even included a Simpsons reference and McGregor saying “fuck both” Jon Jones and Brock Lesnar. McGregor showed once again he is the king on the mic. …At UFC 202, the world can see if he’ll be king once again in the Octagon as well.

Watch the entire, complete press conference below that you simply can not see anywhere else.
https://www.youtube.com/watch?v=jw68TGnsB_4

Timeline: Who In The World is Fighting Tyron Woodley For The Welterweight Title?
← Read Last Post

Full Fight: Christian Lee Suffers a Wild Choke Out At ONE FC: Heroes of the World
Read Next Post →
Click here to cancel reply.