We need that dude from the Da Vinci Code, or the gum shoes from Where in the World is Carmen Sandiego. What the hell is exactly going on with UFC 205’s main event? Things used to be so simple. A guy in a Tapout shirt would call you a bitch until you guys fought. Easy as that. However, with Conor McGregor making Scrooge McDuck money and everyone wanting to follow suit, things are getting really complicated and shady.

Sure, things started easy. After it was long rumored that McGregor would fight Philly-born Eddie Alvarez for his Lightweight title at UFC’s first New York show, the two exchanged obligatory tweets.

Let's do this @TheNotoriousMMA I'm ready !! Your futures not bright enjoy this one while it last . #ItsAllOver

Everyone waited on the eventual announcement to become official after normal UFC bullshit, but now the recent word is that Alvarez wasn’t even offered the fight.

Reports that Alvarez asked for more money to fight McGregor, thus ruining the deal, are not true, per sources. He has yet to be offered it.

Per @MeganOlivi: Eddie Alvarez was sent a bout agreement for #UFC205 vs. Nurmagomedov. However, he missed the deadline to sign the contract.

Hold up, on UFC Tonight it was announced that Alvarez missed his deadline to sign the contract for UFC 205. The test has determined that was a lie. Another reason that was given as to why the Alvarez and McGregor fight couldn’t be made was because McGregor was still injured from kicking Nate Diaz’s leg like Chun Li.

But here he is in the latest video sparring at SBG Ireland… So, someone needs to give us answers. Is this all because McGregor wants to keep the belt and probably even more money then? Or are Alvarez and McGregor getting wild in negotiations and UFC is trying to bridle both fighters?
https://www.youtube.com/watch?v=kdimKfeZkPA

On top of all this, Khabib Nurmagomedov has put both fighters on blast on an endless tirade of savagery. His latest post seems to make him the only person we can believe in this entire ridiculous situation. Nurmie done went and posted BOTH bout agreements he signed to fight Alvarez at UFC 205 and at UFC 206. 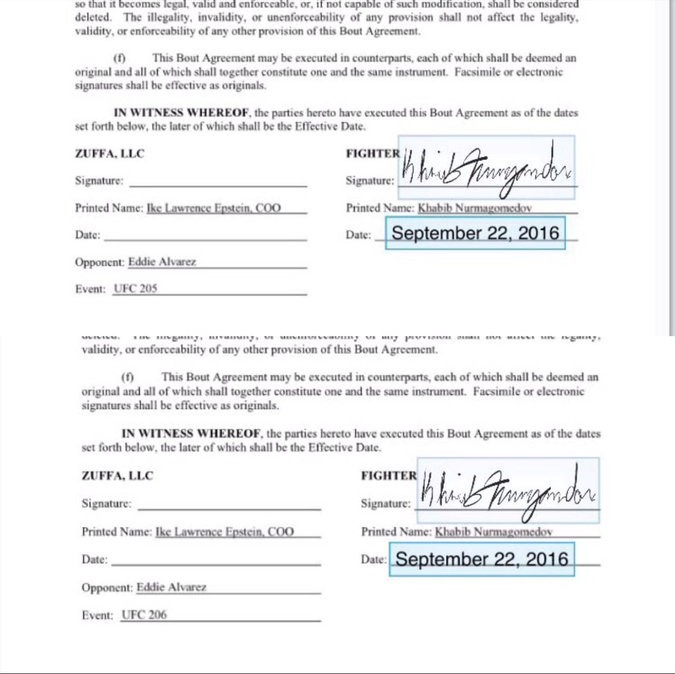