Conor Mcgregor, a UFC lightweight champ has an amazing respect for Nate Diaz.

Mcgregor recently responded on an Instagram post where he gave his former opponent Nate Diaz some serious props. 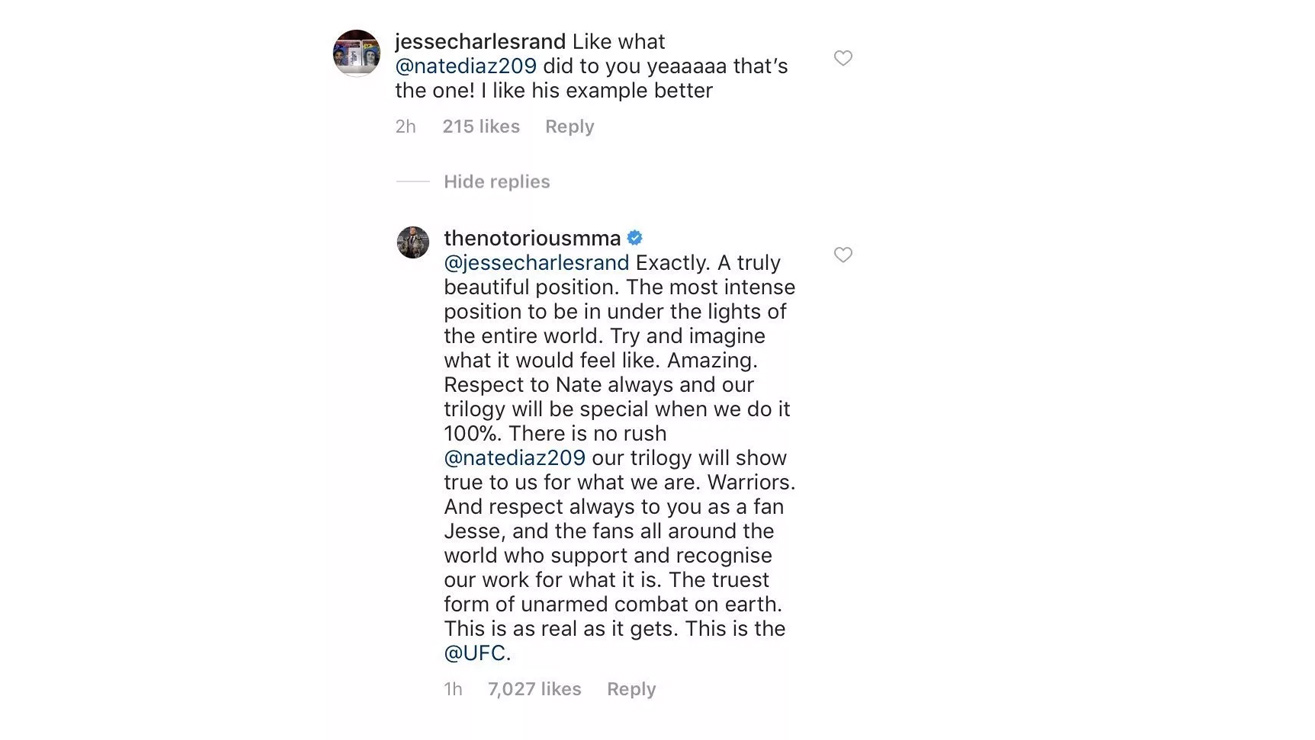 “@jessecharlesrand Exactly. A truly beautiful position. The most intense position to be in under the lights of the entire world. Try and imagine what it would feel like. Amazing. Respect to Nate always and our trilogy will be special when we do it 100%. There is no rush @natediaz209 our trilogy will show true to us for what we are. Warriors. And respect always to you as a fan Jesse, and the fans all around the world who support and recognize our work for what it is. The truest form of unarmed combat on earth. This is as real as it gets. This is the @UFC.” – Conor McGregor

Moreover, Notorious also added that he is looking forward to trilogy bout with Diaz in the not so distant future.

Both met last on August 20, 2016, in the rematch, where the Stockton dropped a unanimous decision to McGregor at UFC 202. Prior to that, Diaz would go on to defeat McGregor in the UFC 196 headliner via second-round submission (rear-naked choke).

Nate Diaz hasn’t fought since August 2016 since suffering that controversial majority decision loss to McGregor in their rematch at UFC 202.

McGregor hasn’t been that active either. Sure he was able to defeat Eddie Alvarez at UFC 205 to score the lightweight title, but he’s been away from the Octagon ever since in favor of challenging undefeated pugilist Floyd Mayweather Jr. this past August.

Who do you think will win the rubber match when Conor McGregor and Nate Diaz meet in their trilogy?

Video: Watch Conor McGregor Playing Street Fighter on a Mini Cabinet with His Face on It
Read Next Post →
Click here to cancel reply.