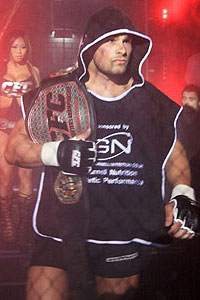 When Wu-Tang Clan made that song ‘Wu-Tang Clan ain’t nothing to [expletive] with’, they were really talking about Karlos Vemola. Today, the news broke that the UFC has finally embraced the future of the heavyweight division and has signed Karlos Vemola to bang against Jon Madsen at UFC 116.

Karlos Vemola may not be the greatest technical striker (yet), but the dude fights like he’s been reprimanded by catholic nuns his entire life. Vemola is undefeated with only two of his seven fights lasting over a minute and one of his bouts ending in only five seconds. Karlos trains by taking a sledge hammer and bashing cars in junkyards.

The world is about to see what happens when you unleash 243lbs of pent-up Czech Republic rage inside a cage and it’s all going down July 3, 2010 in the MGM Grand Garden Arena in Las Vegas with Brock Lesnar and Shane Carwin headlining the card. The earth’s axis may reverse that night.

There’s a reason why they call Karlos Vemola ‘The Terminator’. Check out this highlight reel of Karlos Vemola’s six previous bouts in the CFC. Go to the 1:18 mark to have your head explode from sheer amazement. [Source]

You guys have it wrong, BJ Penn is still the UFC Lightweight champ
Read Next Post →
Click here to cancel reply.