Congrats Jason High on a flawless victory in your Strikeforce debut

Whenever Jason High wins, MiddleEasy wins — and consequently Jason High wins yet again. The guy wins twice, and both victories should be tabulated on his professional MMA record. Everyone at MiddleEasy has already started to party, which probably accounts for the untimely late publishing of this article. Look, we were happy that Jason High and King Mo walked to the cage tonight at Strikeforce Challengers 16 rocking our Green MiddleEasy shirts. Sure we’ve sponsored Jason High in the past at Dynamite!! 2010 in Japan and Titan Fighting Championship, but with ZUFFA’s recent acquisition of Strikeforce, this one was special. In both fights, Jason grabbed a victory — and tonight was no different. After controlling Quinn Mulhern for three complete rounds, High awarded Mulhern his second career loss in his seventeen-fight career.

Everyone at MiddleEasy wanted to create some sort of memento that Jason High could keep and place on display, but unfortunately this whole ‘intense celebration’ thing got in the way. I managed to create a mini-poster for Jason High that celebrates his win, and I posted it below for all of you to point and laugh at. It was the best I could do considering the level of coherence that I currently have. Now, time to finish the partying. Congrats Jason High on your 5-0 winning streak. 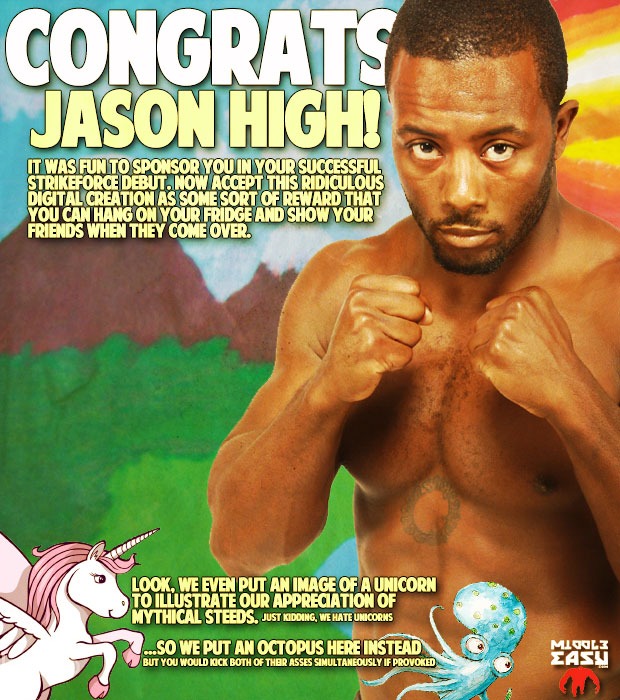 And the Frate Trane continues, Hatsu Hioki has finally signed with the UFC
Read Next Post →
Click here to cancel reply.