Cody Garbrandt Calls Out TJ Dillashaw For Lying About EPO

It is no secret that Cody Garbrandt and TJ Dillashaw are not good friends. Subsequently, Cody was not happy when he heard TJ’s latest interview.

Garbrandt lost the UFC Bantamweight Title to TJ Dillashaw, as well as the subsequent rematch. This was a pair of bouts built around an intense rivalry, as the two were once teammates. As a result of Dillashaw leaving Team Alpha Male, the pair began to have disdain for each other.

In the lead up to both fights, each men shared some harsh words. However, it would be Garbrandt accusing Dillashaw of PED use that would garner the most attention. This occurred when, earlier this year, TJ Dillashaw popped for banned substance EPO, and gave up his title.

Following these events, Cody Garbrandt was very vocal against Dillashaw. He stated that this was not the first time that TJ had used EPO, and that he was a cheater. Furthermore, “No Love” doubled down on these sentiments, following a recent interview TJ gave to ESPN. In this interview, the former champ stated again that this was the only time he had used EPO, but Garbrandt took to social media to challenge that.

“This is some bulls–t. Been on EPO for years, wouldn’t be half the fighter he was without it. Coward!” 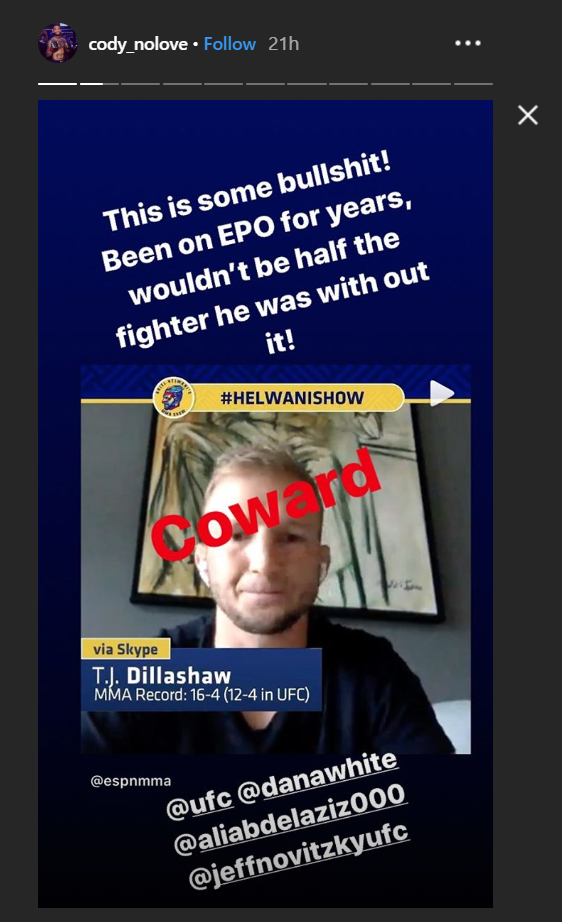 There is no doubt that Cody Garbrandt and TJ Dilllashaw will not ever see eye to eye. However, who do you believe in this scenario? Has TJ been using for years, or was this just a one time move of desperation?