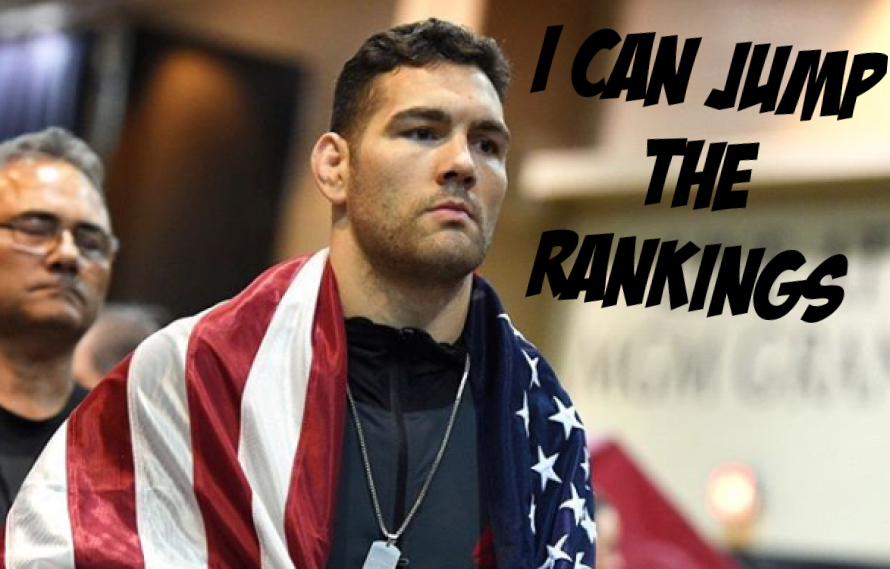 Chris Weidman is slated to make his Light Heavyweight debut at UFC on ESPN 6. As a result, he believes that a win there would earn him a quick title shot against Jon Jones.

Weidman has had a tough run in his career, as of late. The former middleweight champion has only won one fight since losing his belt in 2015. Additionally, he has battled with injuries which have left him barely able to compete. Therefore, he is looking to make a fresh start, by moving up in weight, to 205lb.

In his debut at the weight, Weidman will be taking on undefeated prospect Dominic Reyes. Despite the fact that Weidman does not have a win at this weight, he believes that by beating Reyes he could earn a shot at the title. Speaking on UFC Unfiltered, he explains that the light heavyweight division is so shallow, he could earn a quick shot.

“If it’s up to me, I dominate Dominick Reyes and I go against Jon Jones. That’s the goal. I want to beat the best, All the guys kind of ranked in the top five, I feel like Jon Jones has kind of beat most of them already. It does kind of give me the ability to kind of skip the rankings a little bit and jump up there.

If the UFC and the fans and everyone thinks it makes sense. But first thing’s first, I gotta prove myself in the weight class. Otherwise none of this matters.”

Recently Jones was a bit dismissive of Chris Weidman calling him out. However, if he does get a dominate win, would you be interested in seeing these two fight?

Israel Adesanya Calls Jon Jones Jealous: "I Will Move Up And F**k Him Up"
← Read Last Post