Kattar returned to the win column in a big way by defeating Chikadze via unanimous decision to inflict the latter's first defeat in the UFC.

Chikadze is going kick-heavy as expected to start this contest. Both fighters start to exchange more. Chikadze slips after missing a head kick and Kattar takes advantage as he gets him down. Kattar has the half guard position and remains in control on top for over a minute. However, he isn’t landing too many strikes. Chikadze looks to scramble but Kattar takes him down again. Chikadze attempts a guillotine but Kattar escapes. A scramble sees Chikadze momentarily on top but Kattar eventually takes his back and has the hooks in. However, Chikadze was in no real danger as the round ends.

Chikadze lands a body kick. He connects with a right hand as he steps in soon after. Chikadze lands another big body kick and follows it with a straight left. Kattar eats some more body kicks but is starting to find success with his head movement, boxing and pressure. Chikadze is doing damage with some strong jabs though. Chikadze is starting to land more strikes as he defends a takedown attempt from Kattar soon after. Kattar, however, lands a left and follows it up with a knee and an elbow. Chikadze is continuing to get backed up and looks labored. Chikadze puts some pressure but eats a spinning back elbow. This is becoming the war many expected! Kattar takes Chikadze down to end the round.

Kattar continues to pressure Chikadze. Chikadze is showing good head movement, though. Chikadze defends a takedown attempt. However, Kattar continues to walk him down. Kattar lands an elbow. He follows it up with a one two. Chikadze is starting to look gassed, but he is still throwing strikes. Chikadze is starting to kick again as he lands three leg kicks in succession. He now connects with some hooks. Kattar shoots with the single leg and has takes Chikadze’s back. However, Chikadze remains on his feet and separates. Kattar lands another step-in elbow. Chikadze finds some success now but nearly loses his footing as he misses a strike. Chikadze is bloodied up. However, he finds some momentum to end the third round.

Chikadze is emptying his gas tank as he his throwing plenty early on in the final round. Kattar, however, is starting to walk him down again. Kattar lands two big elbows. He is pouring on the offense. Kattar blocks a high kick. Kattar lands a big right hand. Chikadze is somehow still standing and throwing strikes. Both fighters are throwing with reckless abandon to end the round. Chikadze goes down and Kattar ends the fight on top. What a war!

Things are getting 𝐇𝐄𝐂𝐓𝐈𝐂 early 👀

Non stop offense from both men in round 2️⃣

Talk about starting the year with a BANG 👊

Fight of the year so far 🍿

The output for both men is RIDICULOUS 👏

THAT's HOW YOU MAKE A STATEMENT 💥 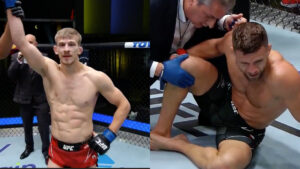 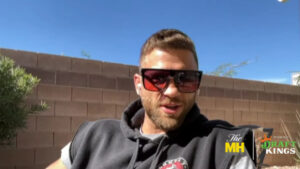 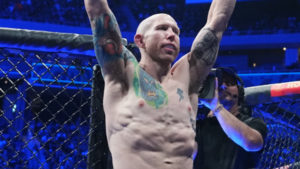 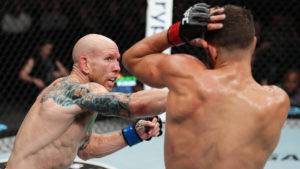 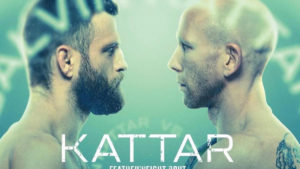 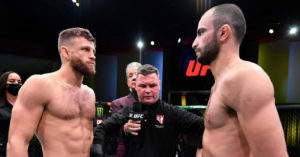