Check out what the fighters had to say about Carano/Cyborg

We’ve interviewed a lot of fighters on MiddleEasy.com and we’ve always posed the question ‘Who will win in Carano vs. Cyborg?‘. Here is what they had to say:

“Gina. I think that Cyborg has all the tools to beat Gina but I don’t think that she has a head enough to follow any sort of game plan. She kind of goes in like ‘RAAAWR. I’m a monster!’. Just going kind of ape crazy. I think Gina’s striking is sharper. I think she has kinda a cooler head on her to fight—to put a game plan together so … um yeah, so that’s the way I feel. I think Gina hits harder too.”

“Um…This is a hard question for me to answer just because I’m friends with Gina and I don’t wanna say the wrong…um…It’s just that um … alright…I think that Cyborg is definitely…she’s a seasoned athlete you know? That’s what she does. Gina kinda does her own thing right now with the TV stuff and everything which might get in the way of training. But it will be a good fight. I know everybody is looking forward to it.”

“Man I’m going with Cyborg. She got some hands, she’s serious. She’s real athletic, she can go… you know what I’m saying?”

“That’s a tough one, everyone is saying it’s either like the beast with raw power (Cyborg) or Carano with the technique; but um for technique, I saw good stand up, I’m not sure exactly how technical she was because like for example when she fought Kelly Kobold, Kelly was doing a lot of pushing her into the cage so we really didn’t get a good opportunity to see a lot of–I mean, technique demonstrated. I’m kind of afraid to say that, so I’m not really sure if Carano has been tested so much. She’s fought a lot of lighter opponents so I’m really not sure, like I wouldn’t bet money on either one because I think Cyborg is like an animal and I think Carano—yea, so I’m not sure to be honest with you.”

“That’s friggin hard…they both pose very different problems and you would have to fight them completely different. I’ve fought a lot of people like Cyborg but people don’t understand the difference between both of them. Not to take anything away…yeah they’ve had seven/eight fights or whatever but they’ve really never gone against a big strong person that has a background in striking. So I think we get to see how either of their chins really are going against someone of their own size which we kind of will get to see in August.”

Justin Wren (Contender in the upcoming The Ultimate Fighter Season 10) 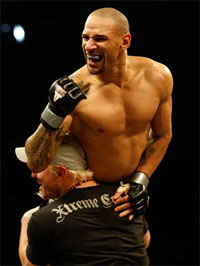