A few days ago, Scott Coker mentioned that Strikeforce visited that gargantuan piece of architecture in Arlington, Texas known as ‘Cowboys Stadium’. Jerry Jones, the owner of the Dallas Cowboys, said he built the old Cowboys Stadium without a roof so that God could see his favorite team play. Apparently, Jerry built the new stadium so that God could play Halo 3 on the world’s largest HDTV. We caught up with Randy Chase of EA Sports to see if he could divulge any information on Cowboys Stadium being included in EA Sports MMA. In this interview, we managed to squeeze out every morsel of information including the reason why Genki Sudo and Kazushi Sakuraba were not included in the upcoming game.

So now that we know Scott Coker has been eying the Cowboys Stadium as a potential venue for a Strikeforce event, did you manage to include it in EA Sports MMA?Yeah, we were going to leave it as a bit of a surprise for the fans when they picked up the game, but with all the rumors out there we told Scott Coker if anyone asked, he could tell them it was in the game and here we are. Basically we have the Madden franchise and we have Cowboys Stadium in the Madden franchise and we thought it would be a cool venue to be in EA MMA as well. So you really have a breadth of venues to fight in, from small places like a high school gymnasium to like a hotel ballroom all the way to a fight at Cowboys Stadium.
Tell us more…We kind of have a special setup as you come in you can see the giant Jumbotron and everything that’s going on in the arena, you see Jimmy and the fighters up on the screen. It’s a really cool experience to see an MMA fight in that big of a venue. 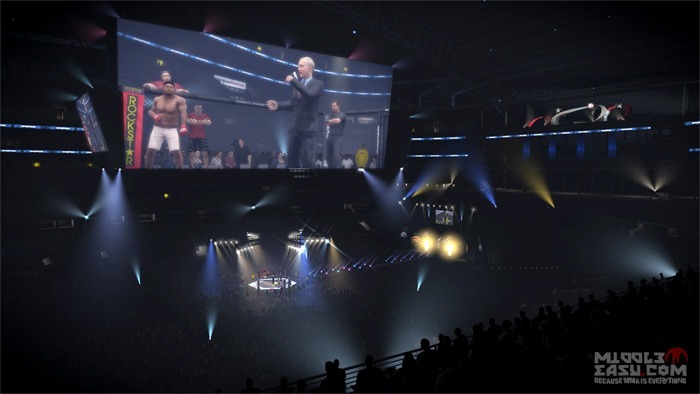 It seems like everyone wants to know why Sakuraba and Genki Sudo were not included in EA Sports MMA.When we went out to try and sign the fighters, we can’t go into all the details, but some fighters have contracts preventing them from being in other games and there are other reasons things didn’t get worked out. Each case is a little bit different.
Are some fighters more prone to getting cut than others?Yeah, you have ratings and certain guys take more damage than other guys and throughout a fight especially if you take multiple hits to a particular area you’ll start seeing the damage and there will be bleeding. I just got out of my career mode and had my first fight with Fedor and it was like a five-round all-out brawl and both of us were covered in blood by the end of the fight. It was awesome.
How long is the average career mode?The way that they’ve done career mode is that you get about 40 fights and he ends his career, but you can still fight with him online and stuff. I’m actually doing one right now, I just got done fighting Bobby Lashley with my create a character. It takes a good amount of time to get through a career and it also depends on your weight class, the heavyweights have a lot more first-round knock-outs.
Will the “Don’t be scared homie” t-shirt be in the game?(Laughs) Actually probably not, we’re finishing up the game right now but definitely funny stuff from Mayhem Miller.
Will there be a create-a-shirt option?Not in this edition. We have a number of shirts including the MiddleEasy t-shirt in the game. We have everything from One More Round and many other shirt manufacturers in the game. Shorts as well, Clinch Gear and those guys, so, a good amount of things to choose from but no creating this time.
What are your plans with downloadable content?We haven’t released our plans for downloadable content yet, we will later. We usually support all of our games up to and beyond when the next game comes out as far as having online available and all of that good stuff.
What does it feel like to be near the end?There is a lot of excitement and the buzz that is out there in the community is awesome. We try to drive that through to the launch of the game. We have had great support from our partners and the fighters themselves have been great and the athlete interaction in this title reminds me a lot of Madden. The football players love Madden and they can’t wait for it to come out just as much as the fans do and we are seeing that with this title too so it’s very exciting.
Add MiddleEasy to your Google News feed.