Check out Rampage’s Frohawk in HD

Every summer, I go to the movie theatre and just hand the cashier at the ticket counter my entire wallet. I remember when ten bucks bought you a matinee, popcorn, and a soda. Today, $10 doesn’t even cover the cost of fuel to get to the cinema. “Inflation” is so misleading. In any other context, it would mean you’re getting “more” of something, but when it comes to money, it means the complete opposite. It’s just like how you drive on a ‘parkway’ and you park on a ‘driveway’. Just goes to show you that the dude who came up with these definitions got ‘medicated’ with Eddie Bravo one too many times. Don’t worry, you’re only a few clouds of smoke away from the deeper meaning behind all that. Nick Diaz figured it out, and now he’s headed to fight in Japan where $10 = 950 Yen…and that buys him a bag of ‘enlightenment’ in any language he wants.

The only redeeming factor about heading to the movies on June 11, 2010 is that your $22.50 will get you a huge box of Nestle Goobers and an air-conditioned seat in front of the world’s largest frohawk as Rampage Jackson hits the silver screen as B. A. Baracus in the New A-Team movie. Check out this new HD trailer we found on thefightnerd.com. 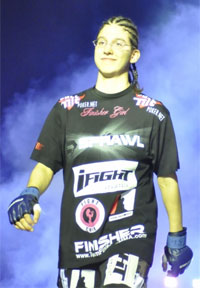