Some people thought that Vitor Belfort waited too long to attack Jon Jones and had he made aggressive attempts sooner into their UFC 152 fight, the outcome could have been radically different. Chael doesn’t care either way. He just wants to fight Jon Jones whether it’s for a belt or just to exercise his first amendment rights with the greatest of ease. For those of you who are sad that the war of words between Chael and Anderson is over, it’s cool… Now he has aligned every chapter of his verbal arsenal at Jon Jones. It doesn’t seem that any topic is off limits either. His latest insult posed a question to Jon Jones that hits below the metaphorical belt, but we wouldn’t have it any other way. That would be far too G-rated for MiddleEasy. 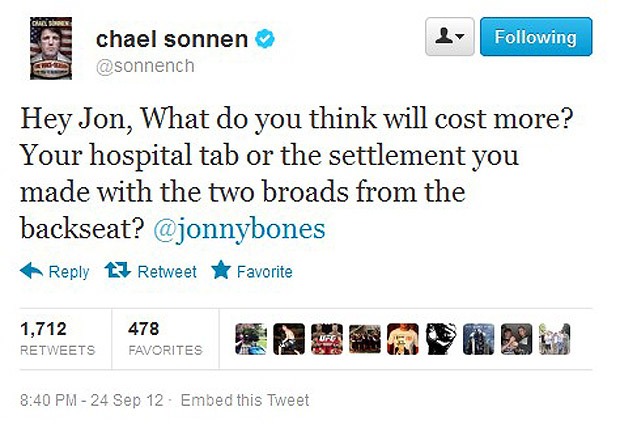 Chael Sonnen is a marketing genius. You don’t need to understand why he says the things he does to a person that he’s not scheduled to fight. As long as it makes sense to him, all you have to do is follow him on twitter and enjoy the wittiness.

Apparently Gina Carano is going to star in the female version of The Expendables
Read Next Post →
Click here to cancel reply.