Donald Cerrone Called UFC About Mcgregor Situation: “They Tell Me To Shut The F— up And Go Sit In The Corner.”

Following his victory over Alexander Hernandez on Jan. 19, 2019 at UFC on ESPN+ 1 from Brooklyn, New York, Donald ‘Cowboy’ Cerrone expressed his interest in fighting with former two-division champion Conor Mcgregor.

Irishman congratulated ‘Cowboy’ for his impressive win and accepted the call out that Donald Cerrone dished out at UFC Brooklyn post-fight interview.

‘Cowboy’ further fueled speculation last month when he posted a message featuring his bottle of Budweiser alongside Conor Mcgregor’s Proper No. Twelve Whiskey, saying July 6, which is a date for UFC 229 event held in Las Vegas.

Although Cerrone so wants this fight, UFC head honcho Dana White said last week that this fight is nowhere close to a done deal and that they’re looking some other opponents for ‘Cowboy’ as Mcgregor wants to fight with Khabib Nurmgaomedov.

“Conor won’t fight unless it’s the main event,” Cerrone said. “I don’t know if it’s an ego thing or a status thing for him. I don’t give a shit. I’ll fight anyone, anywhere, and I stand by that all the time. I guess he’s a prima donna and only takes main event spots. I don’t know.”

No doubt Mcgregor is king of PPV events of all time who holds three biggest records. So taking the Main event slot means he can also take share in Pay-Per-Views beside his fight purse. Meanwhile, Cerrone is a guy who’s ready to fight anytime, and anywhere UFC places him.

Annoyed Cerrone (35-11) says he’s so ready to fight, but Mcgregor went radio silent after putting out his interest in this fight.

“We were all waiting on Conor for April, and he said he wasn’t ready,” Cerrone said. “I don’t know how in one breath you can say, ‘I’ll fight anyone, anytime, anywhere,’ and the next one says, ‘I’m not ready for that one.’ I’m more annoyed that he went radio silent after putting it out. I get it, you want to stay relevant by putting it out there, but then you can’t go radio silent. Sack up, bitch. Sign the fucking paper.”

McGregor (21-4) is coming off a submission loss from the hands of UFC lightweight champion Khabib Nurmagomedov at UFC 229 back in October. Currently, he’s serving a six-month suspension (retroactive to October) for his role in a post-fight brawl that means he is eligible to return to Octagon in April. 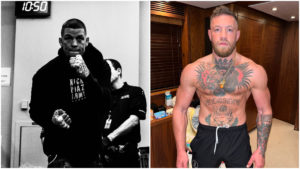