At UFC 274, the first-ever UFC women’s strawweight champion Carla Esparza took the strap back from Rose Namajunas. Following an uneventful showdown between the two ladies, Jessica Andrade labeled her the “champion of boredom”. Andrade followed up with a barrage of messages targeting Esparza and now she has responded to her call out.

Carla Esparza goes in on Andrade

This past weekend, Esparza managed to get two up over ‘Thug’ Rose who ended up losing the rematch eight years in the making. Both athletes faced a lot of heat from the fans and fighters alike for a slow-paced fight with little to no significant moments in between.

Regardless of how much action there was in the fight, Esparza came out on top of the contest. Jessica Andrade did not waste a second to trash-talk the ‘Cookie Monster’ after her win at UFC 274.

After receiving numerous messages aimed at her, Carla Esparza has now hit back at Andrade. In a recent interview with MMA on SiriusXM, the 34-year-old shared her thoughts on the callouts.

"I'll fight whoever, I always have. I've never turned a fight down in my career."

“I know that she was like talking crap but that’s not something new from her, especially to me. She just she’s always trying to like, ‘Carla, Carla, Carla’. I remember back in the day she even posted like pictures of my face from my story like, ‘Carla has a scared face.'”

“She made them as like actual posts and you know, she was just like, ‘oh, this girl is scared.'”

“Whatever, if we end up fighting, we end up fighting. At the end of the day, to keep it real, she can’t hang at 125-lbs. She’s never going to be champ at 125 so she feels like she needs to cut a crap ton of weight and come down and try and fight other people.

“That’s fine! I’ll fight whoever, I always have. I’ve never turned a fight down in my career.”

Andrade’s history of calling out Esparza

Coming off a spectacular win over Amanda Lemos last April, Jessica Andrade became the first fighter to win by a standing arm-triangle choke. The 30-year-old Brazilian shares a win over Namajunas with Esparza but she did concede to Rose the second time around.

Andrade has a history of calling out Esparza. In a series of tweets posted online, Andrade fired shots at the reigning UFC women’s strawweight champion.

Let's go Carla Esparza, you're going to run away from me until when? Will I be blocked on Twitter too? @danawhite @Mickmaynard2 @UFCBrasil @ufc @CarlaEsparza1 pic.twitter.com/rcjVja7IKu

“Let’s go Carla Esparza, you’re going to run away from me until when? Will I be blocked on Twitter too? @danawhite @Mickmaynard2 @UFCBrasil @ufc @CarlaEsparza1“

“I take advantage that you didn’t block me on twitter, I want to say that your fight yesterday was the worst in strawweight history, champion of boredom, I can’t wait to rip your head off. congratulations on the boredom belt, but fans of this sport want to see a massacre,I’ll do!“

Any of the top 5 would have fought better than the @CarlaEsparza1 boredom champion did yesterday 🤦🏻‍♀️ Shame on the division. worst fight in the division's history. it was a disgrace to women's MMA. arena booing the fight. fans did not expect this.

“Any of the top 5 would have fought better than the@CarlaEsparza1 boredom champion did yesterday 🤦🏻‍♀️ Shame on the division. worst fight in the division’s history. it was a disgrace to women’s MMA. arena booing the fight. fans did not expect this.”

Andrade has generated a massive amount of hype behind her following her historic win. UFC president Dana White shut down talks of a potential third fight between Esparza and Namajunas leaving the room open for Andrade to take the title shot.
For more MMA News, Rumors and Updates follow the Red Monster on Facebook, Twitter, YouTube and Instagram
FacebookTwitterFlipboardRedditWhatsAppPinterestLinkedIn 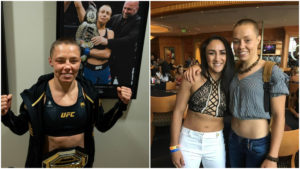 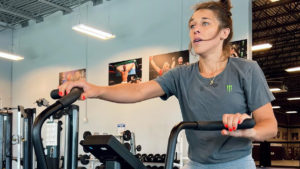 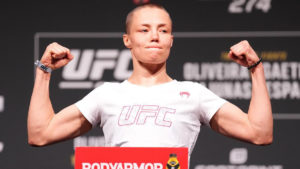 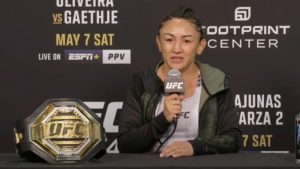