Last year I sent this Shine Fights: Mayorga vs. Thomas poster to someone named Matthew R. after a contest they won on Twitter. The poster was shipped, and weeks later I received it back due to an ‘undeliverable address.’ The shipping tube (with poster inside) has been sitting on top of a very high set of shelves for nearly a year and I think it’s time this prize be shipped out to another winner. Some of you may have forgotten the tumultuous time in which Shine Fights tried to assemble the classic boxer vs. MMA practitioner match, only to be shut down by Don King and his duffel bags filled with $1,000,000 in cash. It was the fight that never happened, yet a few posters were printed out and offered only once in a boxing gym in downtown Los Angeles last year. I was in the gym, grabbed a few posters and as of right now I am offering you my final Shine Fights: Mayorga vs. Thomas poster.

To win, you must caption this old-school, Pride-era picture of Rampage Jackson hanging out at McDonalds with Alistair Overeem that just surfaced today. The funniest caption will win and all entries must be received by 2:00 pm PST on May 26th 2011. To enter, leave your caption on the comment section below. The winner will be announced on this article and your poster will be shipped out on the same day. Feel free to enter as many times as possible, it’s free. Also, I think a spider just bit me on my right shoulder. Damn.

Update: We have a winner ‘Is that a hammer sticking out of your pants or are you just — oh..it is a hammer.’ – wetchinchilla. Enjoy! 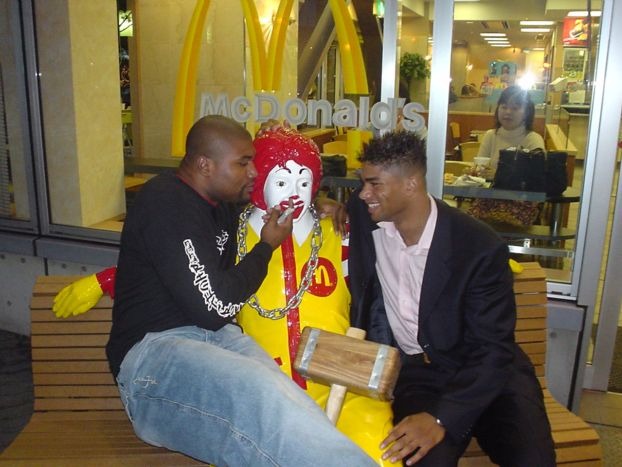 Josh Barnett tells us why every MMA fan should watch his benefit concert tonight in Hollywood
Read Next Post →
Click here to cancel reply.