Daniel Cormier, a light heavyweight champion will square off heavyweight champ Stipe Miocic at UFC 226 in July after they coach a season of The Ultimate Fighter. The event set to takes place July 7 at T-Mobile Arena in Las Vegas and airs on PPV following prelims on FS1 and UFC Fight Pass.

Daniel Cormier told the media that his friendship with teammate and former two-time heavyweight champ Cain Velasquez would make it hard for him to accept a crack at Miocic’s title. DC had previously claimed that the size disadvantage he would encounter against the elite fighters in the heavyweight division was a discouraging factor. However recently Cormier, said he cant beat Cain.

Cormier dropped to 205 pounds and has had much success. He’s avoided the topic of fighting back up a division, though, because his longtime friend Velasquez has either held or hovered around the gold during Cormier’s run.

While this is insane, Cain Velasquez, who is a teammate and friend of Cormier had some words about this fight, recently took to social media, saying that he will train and support his teammate during the entire process.

Like always, I'm gonna be in the gym everyday to help my brother @dc_mma become the next heavyweight champ at #UFC226. Once he wins, things could get interesting. #AndNew #WeAreAKA #GonnaGetMyBeltBack

“Like always, I’m gonna be in the gym every day to help my brother Daniel Cormier become the next heavyweight champ at UFC 226. Once he wins, things could get interesting. And new. We are AKA. Gonna get my belt back.” — Cain Velasquez on Twitter.

Oh well, is Cain Velasquez teasing the idea that if Daniel Cormier manages to bested Stipe Miocic, that he’ll fight his teammate? With the idea of teammates fighting each other could get a bit complicated, it is worth noting that there could be a situation that they don’t face each other even with a win As Cormier recently announced whatever happens in his career, he plans to retire before March 2019.

Even UFC got a bit of reaction: 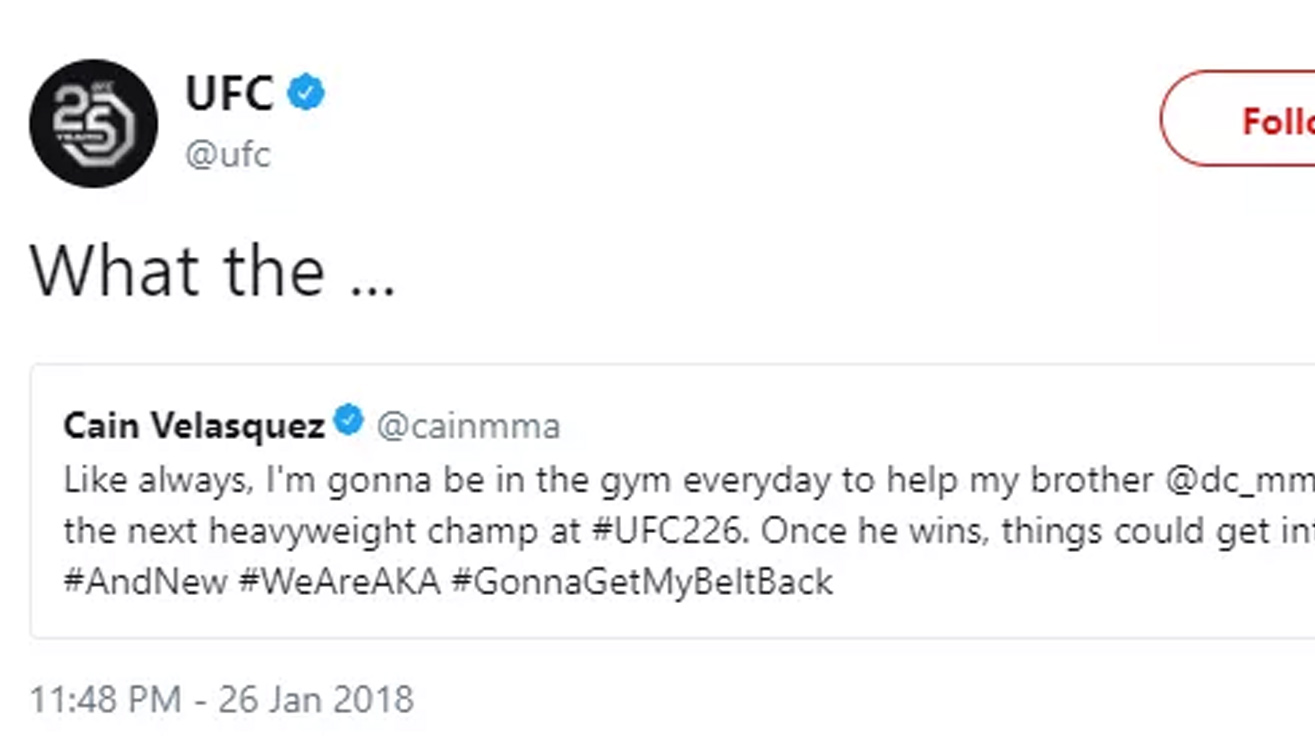 Not only that,  former UFC light heavyweight challenger Alexander Gustafsson has been looking for another shot at the title. After suffering a loss to Cormier back in 2015, Gustafsson has won two in a row against top foes. As Jon Jones career is up in the air, so Gustafsson has said the only fight that makes sense to him is a rematch with Daniel Cormier. Upon hearing of UFC 226 super fight between two champs, Gustafsson took to social media to express his feelings.

“DC is fighting Stipe?! Well, stop run(ning) and fight me!” Gustafsson wrote. “Don’t even think about giving the fight to anyone else! I have been quiet, had a tough time after my last fight (injury etc.) but I’m next in line and the dc fight is mine! Come on, let’s have another dance for the fans!”