By the time you read this, Strikeforce may be dead

When I was in Singapore last week, I had not one but two separate conversations in which FrontRowBrian’s name was brought up. It was always in an inquisitive way, along the lines of ‘How does this guy know this stuff?’ and ‘Is he a ZUFFA employee masquerading as a regular person?’ No one really knows. His identity is kept secret, like those Asian dudes in the JabbaWockeeZ. He knew about the cancellation of UFC 151 before it was even reported and now he’s claiming that Strikeforce will be disbanded, most likely due to the string of injuries that have plagued fighters the past three months. 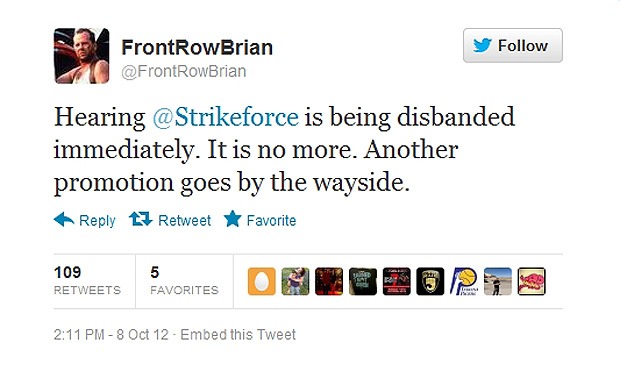 We would be lying if we told you that we didn’t hear rumors of the promotion’s potential demise back when Frank Mir was pulled from his Strikeforce debut against Daniel Cormier. Now it appears that Inside MMA has picked up on the story from their sources, which is most likely either FrontRowBrian or his sources (which probably are a part of some underground coven in Las Vegas). Check out the news report from tonight’s episode of Inside MMA regarding the potential demise of Strikeforce.

DARE hosted an illegal MMA event in Thailand and banned all media from attending, here's the video
Read Next Post →
Click here to cancel reply.